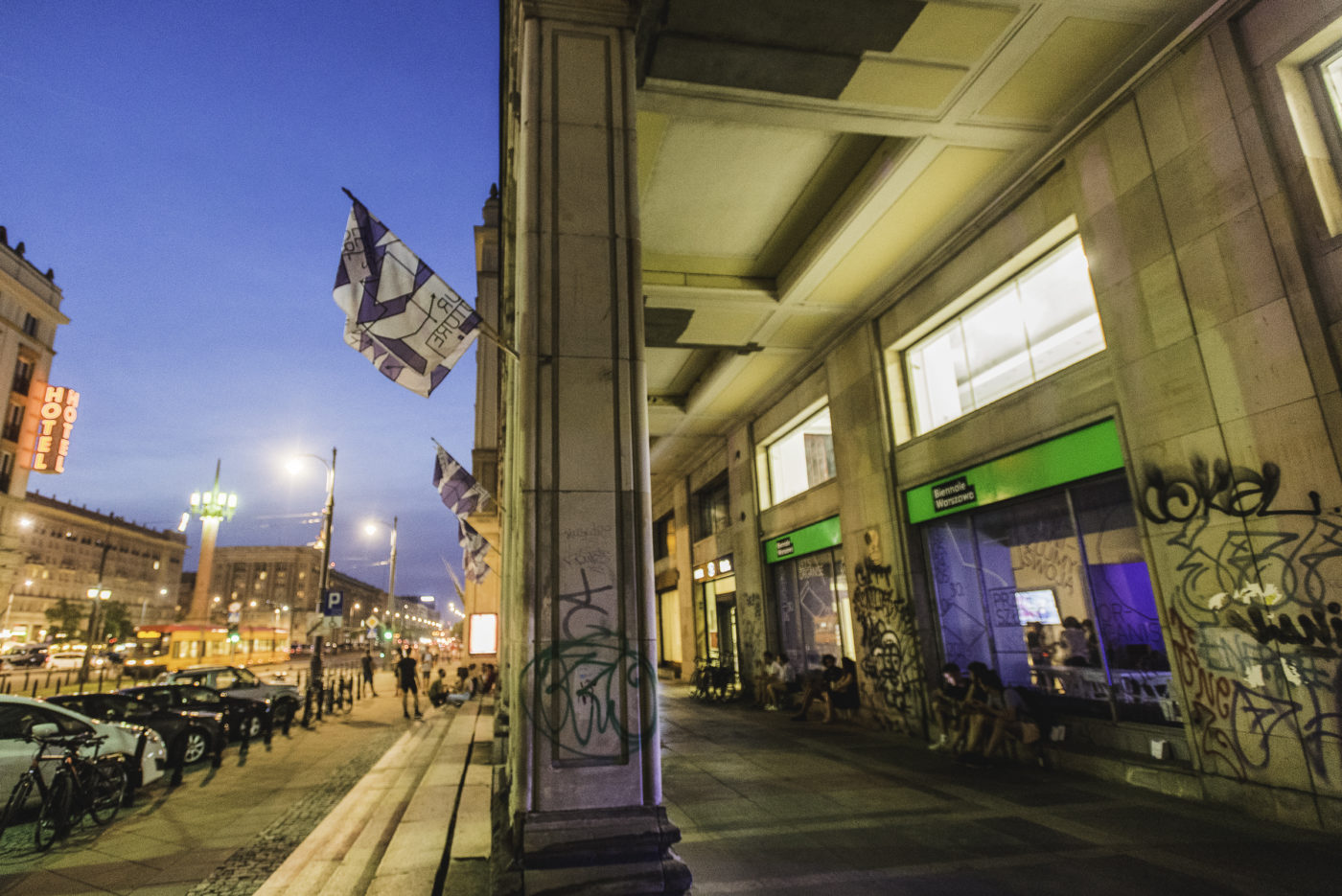 In the next two years, the program of Biennale Warszawa will consist of two parallel lines. The first one will be the continuation of the program from the years 2017-2019, developed as part of ongoing activities of the institution, which was then summarized in May and June 2019 during the first edition of the Biennale,  titled “Let’s organise our future!” This program focuses on designing alternatives for current solutions, expanding horizons of sociopolitical imagination and creating new institutional and organisational formulas. We will continue to carry out the discussion concerning various models of democracy outside the nation state, grass-roots forms of self-governance and self-organisation, and manners of people’s self-determination. We will also continue our efforts toward creating translocal alliances connecting people from various regions of the world in working for the common good of a planetary reach. The city will not cease to be an important issue, a point of reference and space of action, enabling us to articulate democracy both on a local and global scale.

On 12 October 2019, “Social School of Anti-capitalism” is launched – a  year-long workshop program of the Polish Social Forum which will last until June 2020 and it will constitute preparations for the upcoming edition of the Polish Social Forum. In early November 2019, the “Transunions” project will be continued. As part of  the Transeuropa Festival and Biennale Arcipelago Mediterraneo in Palermo, with the cooperation from Biennale Warszawa, the conference “Connecting Peripheries” will be organised; it will analyse relations and links between Eastern and Southern peripheries of Europe. The North Africa – Middle East Europe Forum will make its mark during the Biennale in Kiev, and workshop, research, editorial and publishing work will be conducted next year in Warsaw, Kiev, Prague and Budapest within the East European Biennale Alliance.

Collective artistic activities initiated during the workshop “The Art of the Cooperative” translated into the creation of the art cooperative “Fluid Change” whose activities will soon be inaugurated. Performative events held in 2017-2019 whose main purpose was to include (the experiences of) various ethnic, cultural, and social groups into the mainstream culture, will be also continued in 2019-2021. We are still  regarding them in non-artistic categories, as a universalist political gesture which constitutes a counterproposition to the principles of a “national cultural policy.” “Modern Slavery”, a play directed by Bartek Frąckowiak about forced labour of Ukrainians in Poland and Poles in Italy participated in the Close Strangers Festival in Poznań, devoted to Polish-Ukrainian relations. “Staff Only”, a play directed by Katarzyna Kalwat, based entirely on the experiences of foreign creators living in Poland, will be performed in December on the stage of TR Warszawa and at one of out-of-town festivals. “Revolution that never was,” a joint project of Biennale Warszawa and Theatre 21 directed by Justyna Sobczak will be presented in Katowice, Bydgoszcz, Kraków and next year in Galway, Ireland, as part of the European Capital of Culture. The new version of the performative walk. “Kijowska Street. Not together, but close” will enable everyone to follow the route desgined by creators involved in the Ukrainian theatre scene who, under the direction of Dima Levitsky showcased multicultural and multiethnic perspectives of functioning within the city limits of Warsaw.

Themes of economic, political, and social alternatives will be further developed in series of lectures and seminars: “The pleb, common goods and alternatives to capitalism” prepared by Katarzyna Czeczor, Łukasz Moll, and Michał Pospiszyła, in cooperation with “Theoretical Practice” as well as “Economies of the future” by Przemysław Wielgosz, made in cooperation with economists, experts on financial markets, sociologists and activists. Publications resulting from two conferences: „The Missing Denominator. Universalism and Progressive Cultural Politics” (coedited with EUNIC) and „Cultures of Anticipated FUtures” (together with the Institute of Polish Culture, University of Warsaw) edited by Jan Sowa, will come out in print in late 2019 or early 2020, and together with the book “Solidarity 2.0, or democracy as a form of life” they will open up the new chapter in the publishing activity of Biennale Warszawa, which will be carried on as part of the ongoing publishing programme.

On 1 September 2019, a four-year-long program of research and science residencies FEINART was launched. It is co-organised by Biennale Warszawa with 10 European institutions, academic and research centres: Universities of Wolverhampton and Edinburgh, Zeppelin Universitat and the University of Iceland in Reykjavik, as well as 5 art institutions: BAK in Utrecht, State of Concept in Athens, Tensta Konsthall in Stockholm, tranzit.ro in Bukarest and W-est. The FEINART program will open the framework of an extensive collaboration between degree-awarding research centres in political philosophy, art theory/practice and curatorial studies cultural management, and the independent European art sector,” thus becoming the foundation of the first interdisciplinary and holistic investigation of the democratic role and function of socially engaged art in Europe.

The second program line will be devoted to the analysis of contemporary and future authoritarianisms. Through artistic and research activities, exhibitions and theatre performances, as well as speculative design, we intend to create a hypothetical scenarios of the development of authoritarian practices in future, indicating their connections with representative democracy and the “terror of meritocracy,” with economics and religion, with the exploitation and protection of natural resources, with the application of technology and media for gaining and maintaining power.

But we do not aim only at the reflection on the intense presence of populist and nationalist political movements. We do not mean to stop at only pondering historical forms of totalitarianism which so often become points of reference for contemporary political and social analyses. We are mainly interested in the authoritarian dimension of capitalism which is responsible both for the radical economic policy consisting, among others, in exploiting natural resources and cheap labour, as well as for the depoliticization of the public sphere and controlling democratically elected authorities.

The first part of the program will be devoted to questions related to the political dimension of the authoritarian capitalism, its relationships with the system of representative democracy, and in the recent years with imposing post-democratic (clientelist democracies, hybrid regimes, grey areas, semi-dictatures) or outright authoritarian models, defined by Steven Levitsky as competitive authoritarianism or by Andreas Schedler as electoral authoritarianism.

The second issue we will raise will be presenting various economic models in relation to various models of power, including in India, Brazil, China, Turkey, France, Ethiopia, and Egypt. We will show what similarities and differences occur between Confuciuan neoliberal authoritarianism in China, religious nationalism in India, and the state of emergency in Ethiopia and France, as well as what are the characteristics of the Polish social nationalism which a large portion of researchers of the phenomenon treat in certain respects as particular and separate. In this part of our program we will also focus on the role of economy and religion in creating and consolidating authoritarian political practices in Poland, but also in India and Brazil.

The third block will be organised around issues related to nature, climate and environment, and particularly to the inapparent attitude of authoritarian capitalism (and authoritarian power) to these issues. It concerns extractivism, i.e. exploiting natural resources and using them for economic gains (logging, mining for raw materials or landfilling) as well as using nature for political purposes, including for building racist political ideologies (protection of nature and natural resources from aliens).

The fourth part of the program will be devoted to authoritarianism and technology. We will analyse digital strategies of control and security systems used by states, but we will also look into the role of social media sites in creating new forms of authoritarian power, e.g. by creating cryptocurrencies, or using digital technologies in advertising and political campaigns. We will reflect weather – as Philip N. Howard claims, alongside David Ruciman – one of the possible scenarios for the future is pax technica, a system based on the domination of technology over other domains of life.

Combining historical (archives) and contemporary (maps) threads , and pondering possible scripts for the future, we are starting with “Hiroshima/Love,” a theatre piece by Julia Holewińska, Tomasz Szerszeń and Radek Duda, starring three actors working with Biennale Warszawa: Beata Bandurska, Maciej Pesta, and Konrad Wosik. The point of departure for this performance is invoking a historical event – dropping an atomic bomb on Hiroshima – and then, by asking questions about the application of atomic technology, possible scenarios of ecological disasters, and links between the nuclear and capitalism, to move on to current atomic threats on the example of the radiation zone around the Fukushima power plant.

Artistic and research activities linked to the subject of the broadly understood authoritarian capitalism will be concluded in 2021, comprising a two-year-long cycle.