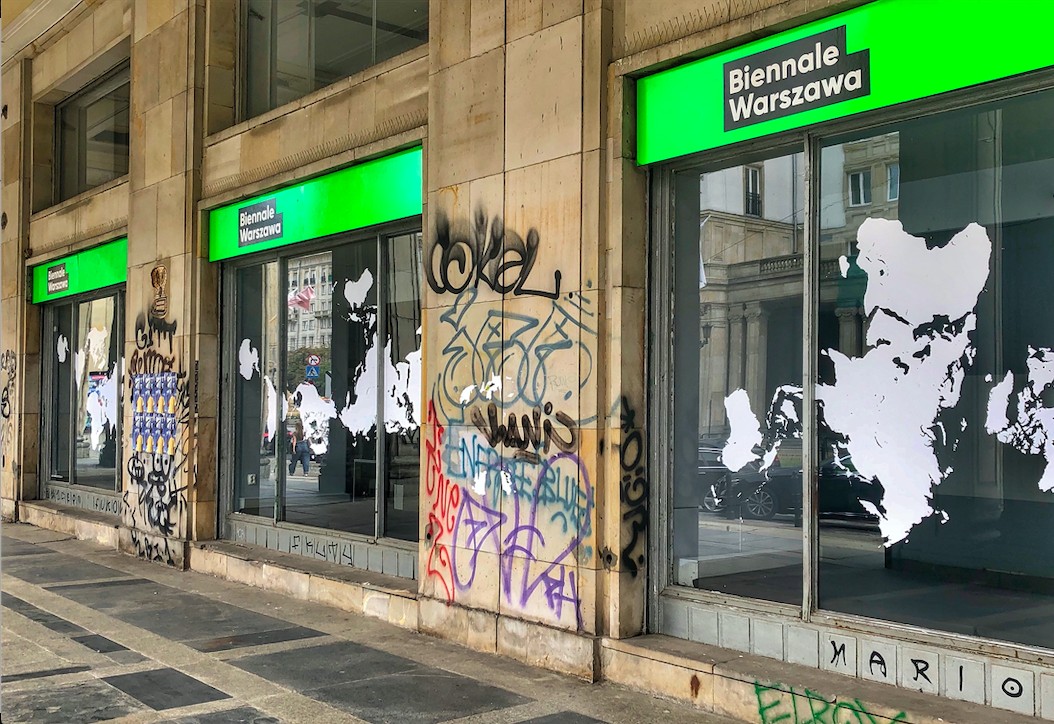 “We protect you from yourselves,” the exhibition by a Spanish collective Democracia, the second season of the “Economics of the future,” residency programmes, interinstitutional networking, and international cooperation – autumn in Biennale Warszawa will be busy.

After summer holidays, Biennale Warszawa returned with the premiere of “Buried Sun”. Aleksandra Jach and Michał Dąbrowski took us on a multimedia journey which makes us reflect upon both historical contexts connected to energy, and the latest ideas and opportunities that emerged alongside energy transformations whose direction still has not been definitively determined. A web document combines an online audio play, visual content, essay, animation, and film, and it immerses us in the middle of perhaps the most crucial of current debated concerning the climate crisis.

“A different culture is possible. Coronavirus and the future of culture in Poland” is a report prepared in cooperation with the economic Foundation INSTRAT. With the critical analysis of current solutions and the response to the coronavirus crisis as the starting point, we are designing a new, inclusive, and equal cultural policy. We present particular alternative options, rooted in solid economic reflection. This is our voice in the current discussion on the subject.

This topic was raised also in the book “The Missing Denominator. Universalism and Progressive Cultural Politics” (edited by Jan Sowa) in which authors like Ana Teixeira Pinto, Andrzej Leder, Ulrike Guérot, Anna Curcio and Robert Pfaller reflect on visions of progressive European cultural policies. The ponder the role of (the new) universalism in the world of division, particularisms, and identity politics. The book which resulted from the collaboration between Biennale Warszawa and EUNIC – European Union National Institutes for Culture has just come out. It is recommended to everyone interested in a more profound understanding of contemporary international processes.

Biennale Warszawa continues international cooperation and networking among institutions with similar goals and activities format, and as a member of East European Biennial Alliance it and within Bienále Ve věci umění / Matter of Art it co-organises the symposium titled “Culture at Crossroads: What Collaboration Do We Want in Eastern Europe”. The meeting in Prague, which will be streamed online, is planned for 18 September. During the meeting we will try to answer the question about the role of art institutions in the changing political and socio-cultural landscape, drafting possible scripts for building solidarity in the field of arts in Central and Eastern Europe.

Another international programme in which Biennale Warszawa participates in FEINART – The Future of European Independent Art Spaces in a Period of Socially Engaged Art. It is a European project of cooperation between research centres and the sector of independent and socially engaged art. Its purpose is the organisation of a scholarship for 11 researchers who want to receive their PhD in the field of socially engaged art. The network covers four universities (University of Wolverhampton, University of Edinburgh, Zeppelin University, University of Iceland) and sever partner organisation (alongside Biennale Warszawa, these are Tensta Konstall, BAK, State of Concept, W-Est, Tranzit.ro and Icelandic Academy of the Arts).

In September, the second season of the “Economics of the future” is launched. Przemysław Wielgosz, series curator, invited to the project eminent Polish economists to consider what economics do we want and need; what kind of economics can answer our needs and challenges. The programme includes ecological economics, feminist economics, and the economics of the commons. The meetings will be held monthly, with the last one organised in December.

Until the end of the year we will also continue our online residency programme “COVID-2019. The World After the Pandemic” with the participation of 15 artists, researchers and activists. Residencies that will be realised in the coming months include: Justyna Orłowska who will recall her experience of the ethnographic research in the Maldives to reflect on the entanglement of the climate and pandemic crises, Tytus Szabelski (who will look into the vision of the future emerging form Amazon patents), Arek Pasożyt (who will take up the new economy of exchange and study alternative methods of valuation), Kornelia Dzikowska (who will study mechanisms od adaptation), Romuald Krężel (whose research will try to find out what the current pandemic crisis can teach us in the context of the climate crisis), Daniel Kotowski (who will raise the issue of the access to information), Bartosz Wójcik (collaborator of Barbadian artistic and literary circles that actively explore topics related to alternative visions of the future), Anka Herbut (who will study pandemic choreographies and the ways bodies function in the public space), Julia Holewińska and Tomasz Szerszeń (inspired by ideas and practices from Latin America, in the course of their shared residency they will take up the subject of artistic utopias and communal life.).  The effect of some residencies will be presented in our MA3450 space (at 34/50 Marszałkowska).

We used the residency format also when we invited Szymon Adamczak with his original project “Polish EIDS” to become our collaborator. Thus, we continue to reflect on political, economic, socio-cultural, and personal contexts of the HIV/AIDS epidemic in Poland which we initiated by preparing together with the EUROPACH research group the exhibition “HIVstories: Living Politics” early this year. During his autumn visit at Biennale Warszawa, Szymon Adamczak, alongside an especially formed team of collaborators, will attempt to deepen the cultural reception of several decades of HIV/AIDS experiences in Poland.

As part of the collaboration with the Ujazdowski Castle Centre for Contemporary Art Residencies cultivated from the last year’s edition of Biennale Warszawa, together with the Empathic Pedagogies Network, we joined the preparations of a seminar/laboratory titled „Re–Directing: East x Empathic Pedagogies”, a collaboratively created workshops and group residency for international and local creators, theoreticians, organisers cantered around mutual learning and unlearning.

Between 1 and 10 October, as part of Warsaw Gallery Weekend 2020 our space will host Galeria Szara from Katowice with its exhibition “No Regerts” by Szymon Szewczyk.

On 23 October we will open the exhibition of the Spanish collective Democracia. The exhibition title “We protect you from yourselves” refers to the topic of new security policies in the changing political landscape and increasingly oppressive regimes. The event, as well as the accompanying public programme, will be devoted to the analysis of the latest forms of authoritarianism. The exhibition curator is Sylwia Serafinowicz from the London organisation a/political.

Stay with us in these uneasy times, both as a safe distance in physical space and online.