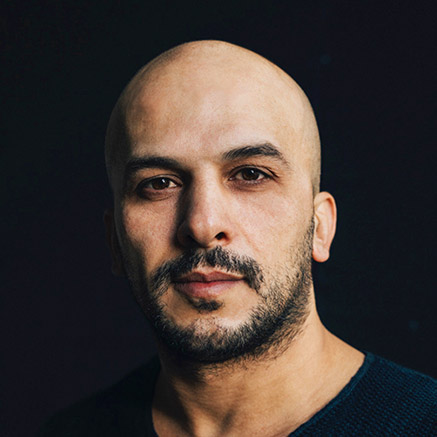 Born in 1976 in Damascus Suburb, and currently based in Berlin, Khaled Barakeh is a conceptual artist and cultural activist. He graduated from the Faculty of Fine Arts in Damascus, Syria in 2005, received his MFA at Funen Art Academy in Odense, Denmark in 2010 and in 2013, he completed a Meisterschuler study at the Städelschule Art Academy in Frankfurt a.M., Germany.

The geographical shift in Khaled Barakeh’s life – moving from Syria to Europe – resulted in major changes in his approach towards his work; originally trained as a painter, he then developed a stronger focus on contemporary art practices. Today, his multilayered works still show influences of traditional methods and techniques while forming a modern collection built through the use of variety of media.  Drawing from his observations of both familiar and strange places, witnessing the repetitive and constantly unsolved social injustice through different points of view, Barakeh approaches creative practices as a tool of social changes and cultural preservation. Considered a part of a global artivism movement, the artist uses the visual references of elements of everyday culture to challenge the perception of existing stagnant power structures and their connection to personal and collective identity, highlighting the paradoxes of the modern global society.

Besides his artistic practice, Barakeh has recently founded a non-profit organisation coculture e.V., through which he manages several initiatives, such as SYRIA Cultural Index and the Syrian Biennale, focused on addressing different facets of the challenges faced by displaced cultural producers in the Middle East, Europe and beyond.  Khaled Barakeh has exhibited at Künstlerhaus Stuttgart, The 11th Shanghai Biennale, Salt Istanbul, Kunsthalle Brandts in Overgaden Denmark, The Frankfurter Kunstverein, Artspace New Zealand, The Busan Biennale, Museum für Kunst und Gewerbe Hamburg and many other institutions and venues around the world.