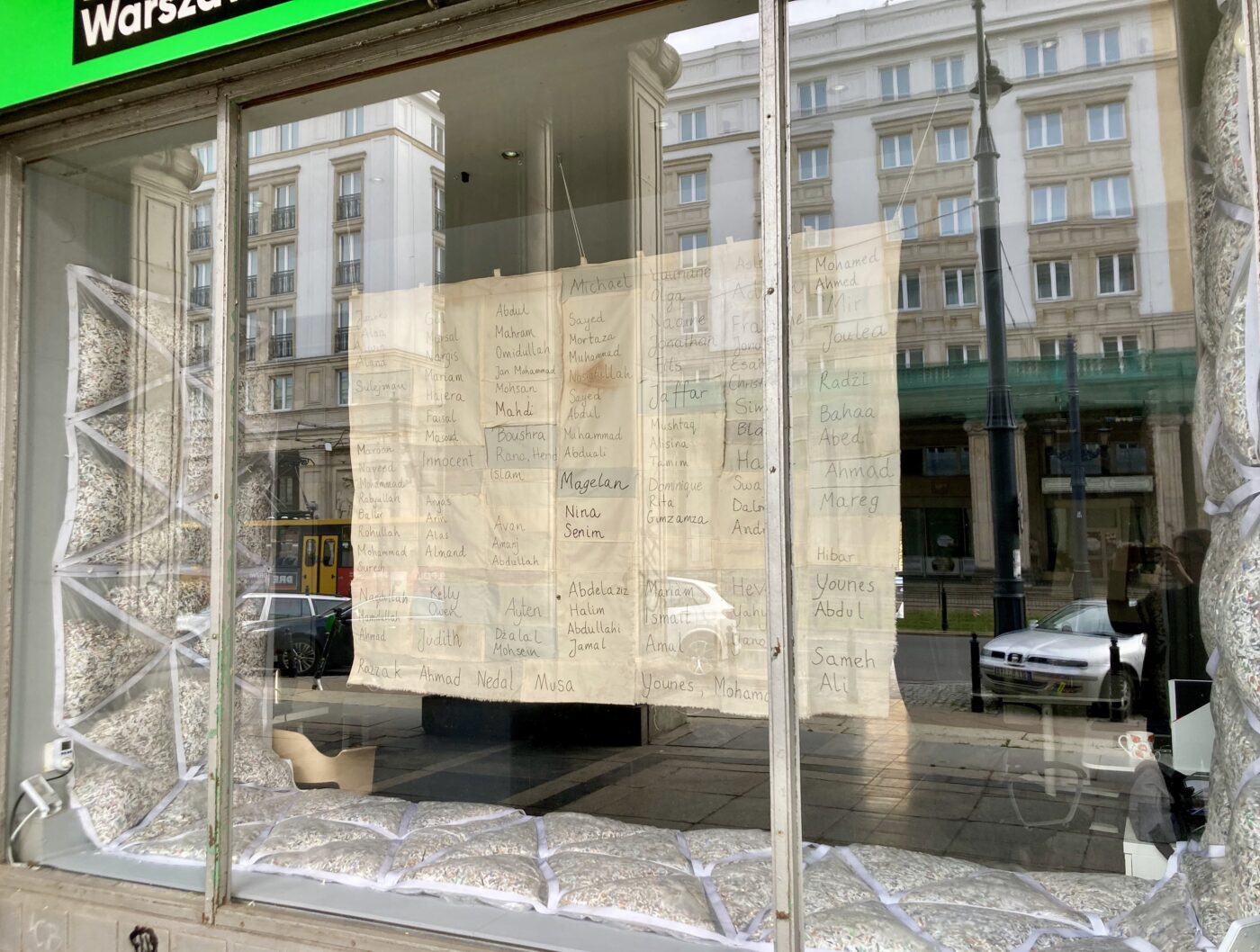 In most cultures, a name is the basic designation of a person. In our civilization, the right to have one is guaranteed by the international Convention on the Rights of the Child. A name means you exist. A name distinguishes you from a group. A name empowers you. Therefore, is giving a name not the best way to make sceptics realise that refugees harassed on the Polish border are flesh and blood people? The are not aliens, strangers, or terrorists. They are people. And no human being is illegal.

In connection with the demonstration “Stop torture at the border” organized in Warsaw, an idea emerged to collectively create a banner displaying the names of all the refugees found so far in the forests along the state border. Researching media coverage and accounts of activist interventions, craftivist Beata Cyruchin collected 113 names. That many could be recovered using the Internet, although the list of persons who desperately look for shelter in Poland is undoubtedly much longer.

Anyone could try and embroider names on scraps of fabric – 20 people applied to participate via @Uchatka fanpage. The embroidery was executed by a rotating cast of volunteers on 15 and 16 October 2021 in a Mokotów studio. The crafting meetings were accompanied by reading out the information on each particular person – however, vestigial data that reached the public do not allow thinking of their subsequent fate with ease.

Pieces of fabric were sewn together to form a banner which was featured in the protest on 17 October in Warsaw, confronting various conspiracy theories about the refugees with their supposed biographies. The stitching and tears are an additional element of expression which emphasise the character of artificial divisions separating states, families, groups of friends, or groups of fellow travellers. The piece is of processual nature – considering the political situation in Poland and worldwide, we should expect that the banner will grow to include even more names. Some empty spaces, symbolizing people whose identity is unknown, will be filled out, as well.

The project arose from the conviction that activism does not mean only street protests, not only occupying space with our physical bodies, not only mass action and not only media endeavours. Protesting injustice can be expressed in many different ways, and each of them can work towards social change. The course of the history is shaped by both isolated turning points, and collective efforts of multiple dispersed initiatives. The important thing are sharp, reactionary and confrontational acts of civic dissent, as well as constant, daily work undertaken on an individual or local scale. These are not competing fields, or mutually exclusive strategies – this is a full spectrum of possibilities. Craftivism, i.e. craft in the service of activism, is one of the tools of forging helplessness into action.

The work can be viewed in the front window of Biennale Warszawa until 15 November, as part of the Hospitality March, initiated in response to the humanitarian crisis on the Polish-Belarusian border.