“We Protect You From Yourselves”, exhibition view, photo by Bartosz Górka, courtesy of the authors, a/political and...
Resources
12.11.2020

We Protect You From Yourselves
3D exhibition 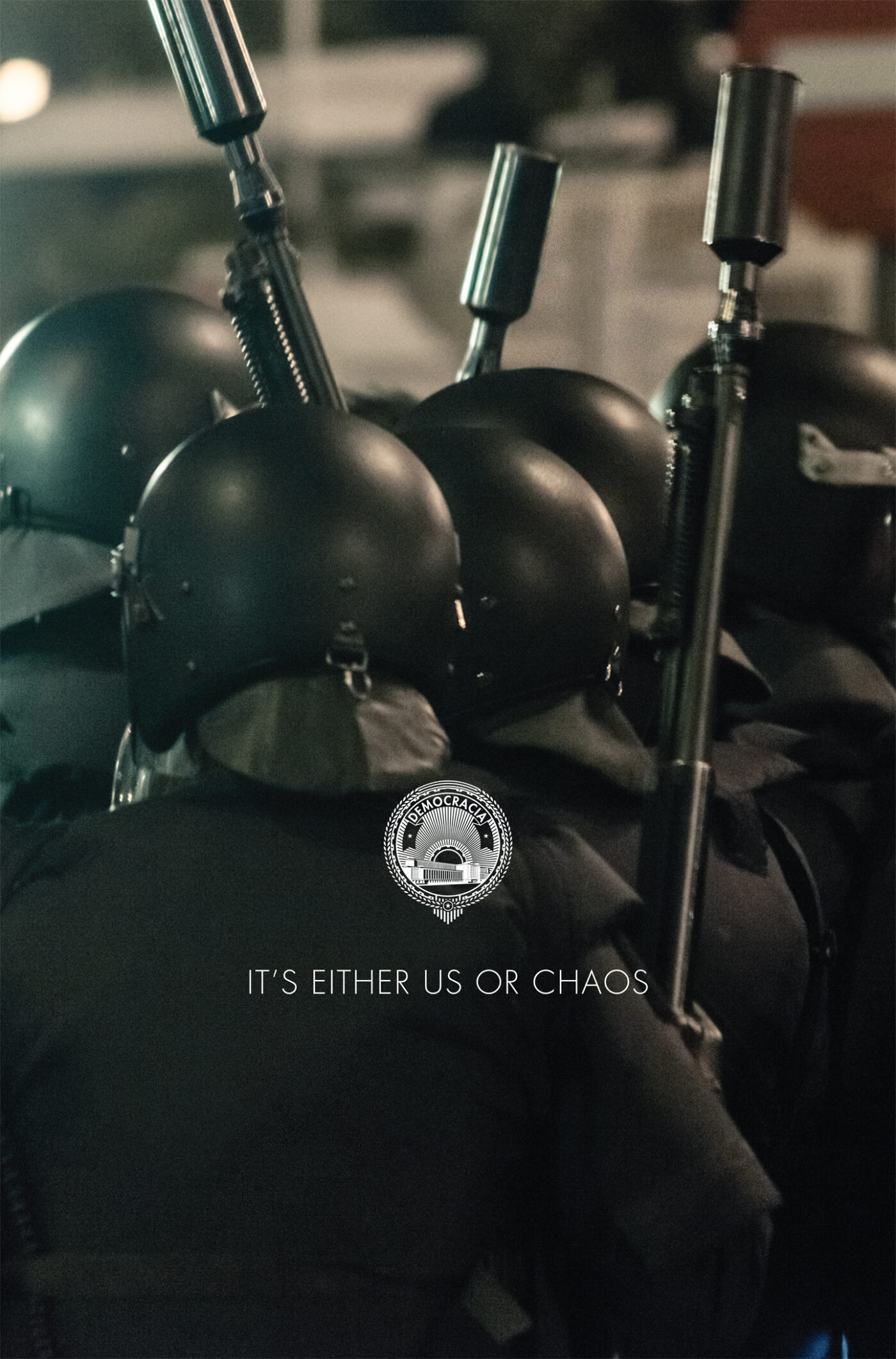 Where does protection end and where do violence and abuse start? Democracia together with the Syrena collective once again ask the question during the exhibition “We Protect You From Yourselves” which will open at Biennale Warszawa on October 23, 2020.

We Protect You From Yourselves is an exhibition spanning over two floors of Biennale Warszawa. Democracia’s arresting series 18 Police Portraits, 2014 occupies the ground floor, establishing the presence of authority. Confronting the police on both floors are dissident voices: upstairs that of the Huey P. Newton Gun Club, depicted in the series Jeremiah, 2018, named after a justice-seeking prophet; on the ground floor, that of a Warsaw-based collective Syrena. The exhibition re-engages with the issues of police brutality and surveillance, addressed earlier this year by Democracia through interventions in London and Warsaw.

Back in July, Democracia hijacked Polish electoral messages that glared from LED screens at Warsaw’s Swietokrzyska underground station, with a multiplied image of a riot policeman (Silence, 2018–2020). This disruption was a stark reminder of assaults on civil rights, now directed at LGBT+ communities, but reflective of wider exploitation of police entitlement. In the aftermath of the Polish parliamentary elections, protesters took to the streets in an act of disobedience that the police brutally suppressed. The photographs of that pacification, like those taken by Democracia during anti-austerity protests in Madrid in 2012, included in the series We Protect You From Yourselves, 2013 and 18 Portraits, 2014, focused on the visible aspects of surveillance and law enforcement. The radicalisation of the police at the street level seems to be reflective of that in digital reality, whereby spyware, such as the infamous Pegasus, is deployed across the globe against political opponents, activists and dissidents (as disclosed by The Citizen Lab).

Amiri Baraka’s divisive poem Somebody Blew Up America, 2001 marks an important moment on the timeline of police ascension to power; Selected verses from the piece appear on the picket signs exhibited on the first floor. The poem was written after 9/11, when new legislations were passed in the US, under the guise of terrorism prevention, to further empower law enforcement officers. In Poland, the same framework was used more recently in the context of the 2016 Antiterrorist Act, which increased the governmental power to invigilate and block information shared via telecommunications. In Jeremiah, 2018, Democracia shows the members of Huey P. Newton Gun Club in Houston, Texas, holding the picket signs. The club, which descends from the Black Panther Party for Self Defence, were surveilled by the FBI. One of their members was spied on and prosecuted as domestic terrorists for speaking about police brutality on social media (Rakem Balogun).

Syrena Collective—who, together with Stop Bullshit (Stop Bzdurom), a radical, feminist and queer collective, found themselves at the forefront of recent protests in Warsaw—shares a broader perspective on the processes enabling the police, which extends beyond the current political make-up of the government. Syrena’s practice, based on the ideas of self-governance, social justice and solidarity, reclaims power from the police and authorities for the community. By doing so, they echo the global demands to defund the police and rethink its role in modern societies.

“We Protect You From Yourselves”

ORDER and Jeremiah series are a joint commission of a/political & Station Museum of Contemporary Art.