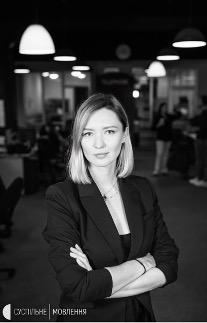 Angelina Kariakina is a journalist and media manager. In 2011 joined Euronews Kyiv bureau. Covered Ukrainian political and social affairs, Maidan protests, Russian aggression and conflict in eastern Ukraine. Joined an independent media project Hromadske TV in 2015 as a journalist and presenter. Covered trials against Ukrainian political prisoners in Russia, refugee crisis in Hungary. Co-authored investigations about events at Maidan, received a prize for investigative journalism. Worked as Hromadske editor-in-chief for 3 years (2017–2020). In 2020 co-founded the Public Interest Journalism Lab and joined the Ukrainian Public Broadcaster as a media manager and editor. Works as the head of news at UA:PBC since 2021.

The Reckoning Project: Ukraine Testifies was launched in the early days of the war, while evidence is fresh in the minds of the victims and...
11.05.2022