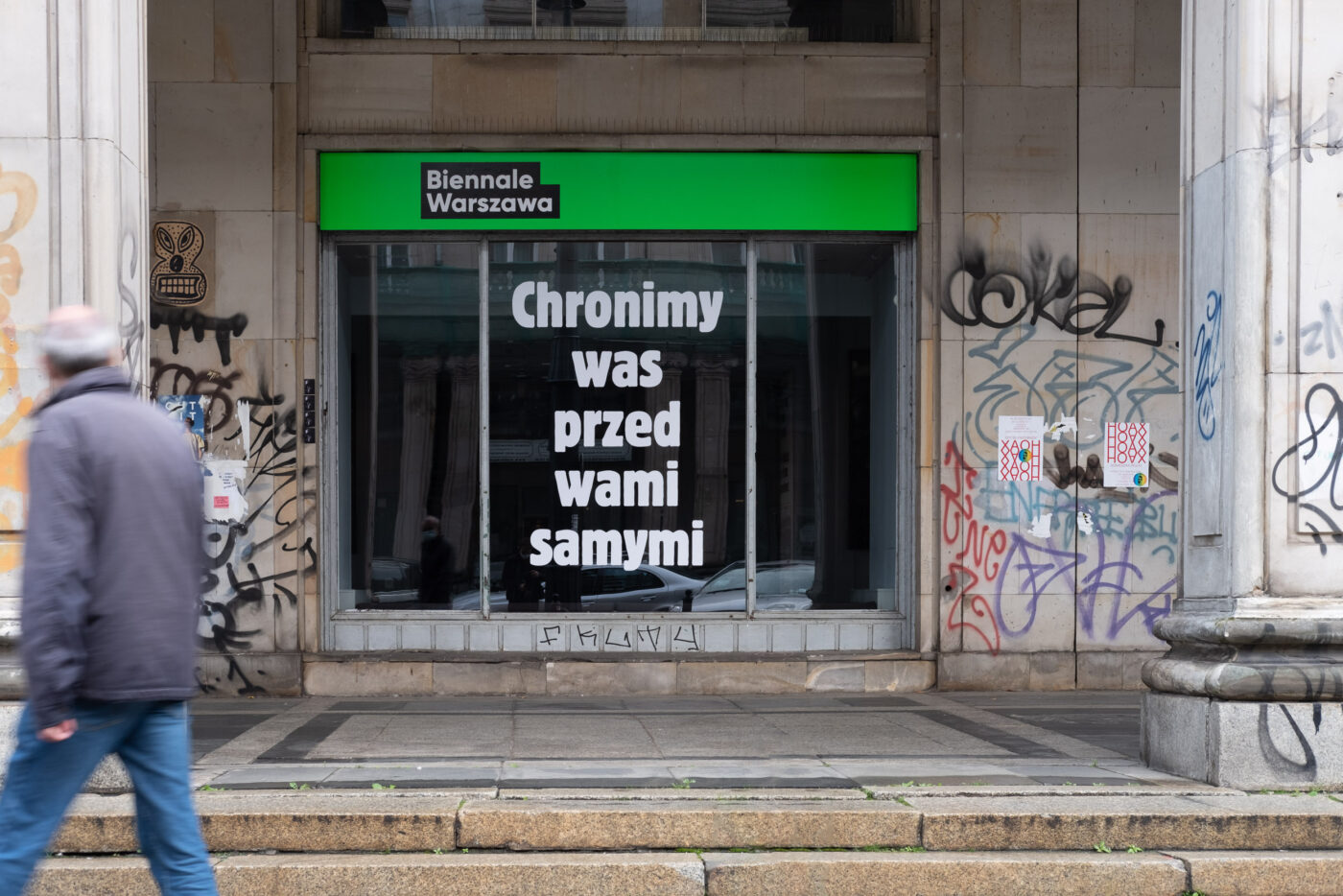 This past year was a time of sudden changes and new challenges. Biennale Warszawa tried to address them, putting emphasis an expanding the horizons of socio-political imagination and searching for collective ways to recover from crisis situations.

At the centre of Biennale Warszawa activities there is always the fight for civil and human rights. In view of the recent events in Poland – protests against the abortion ban and the fight for the rights of the LGBT+ community – the most important exhibition in this year’s programme has become particularly relevant. The exhibition of the Spanish collective Democracia We Protect You From Yourselves, prepared in cooperation with the London-based a/political presented this autumn, raised the issue of surveillance and brutality of the police whose position becomes increasingly stronger in various authoritarian regimes across the world. What will be the future of the law enforcement? The exhibition confronted the images of the authority with the voices of dissent, displayed the process of police militarization and sked questions about the role of the law enforcement. Another event concerning police violence was the conference Who do the police protect? which featured a discussion of the representatives of the Office of the Polish Ombudsman, Panoptykon Foundation and activists working in tenants rights, queer, women’s, anti-racist and pro-refugee movements. The web document which can be found at weprotectyoufromyourselves.com features the same issues.

Actively reacting to the current political situation and using artistic tools to draft new scenarios of the future are the objectives which Biennale Warszawa have been setting for itself from the very beginning of its existence. In this process, everyday practice in the local context is just as important as transnational, interdisciplinary networking. At OnCurating Project Space in Zurich we became part of the exhibition and mediation project Games.Fights.Encounters talking about art and activism, and the exhibition presented at Biennale Warszawa last year, titled FLORAPHILIA. Revolution of Plants, curated by Aneta Rostkowska, travelled in March to the Temporary Gallery in Cologne. As part of the East European Biennial Alliance we co-organised the symposium Culture at the Crossroads: What Collaboration Do We Want in Eastern Europe devoted to the role of art institutions in the changing political landscape. Project FEINART – The Future of European Independent Art Spaces in a Period of Socially Engaged Art in which we participated, is a platform of cooperation between European research centres and the sector of independent and socially engaged art. Mutual learning and unlearning was the subject of the seminar and residencies within Re–Directing: East x Empathic Pedagogies which we prepare together with the Ujazdowski Castle Centre for Contemporary Art and Empathic Pedagogies Network.

As part of international cooperation with the EUROPACH research group, in early 2020 Biennale Warszawa presented the exhibition HIVStories: Living politics. It focused on individual and collective experiences of persons living with HIV, displaying various forms of life of HIV/AIDS politics from the perspective of numerous communities, countries and regions, including Poland, Germany, UK, and Turkey, as well as on the European level. In Biennale Warszawa, the reception of HIV and AIDS issues in Poland is the focus of Szymon Adamczak. The artist’s residency took the form of a research platform devoted to the local specificity of the AIDS epidemic, and filling the gaps of empty or left out episodes of the collective memory.

Social justice, energy policy and models for recovering from the ecological crisis were the subject of the Buried Sun project of Aleksandra Jach and Michał Dąbrowski. It premiered in the summer as a multimedia account of how production and consumption of energy affects our everyday practices and deeply impacts our economy, politics and culture. Biennale Warszawa is seeking formats of action which would enable responding to new social situations. An extensive web documentary Buried Sun was a form of virtual exhibition and an invitation for our audience to enter the online space. The Internet is also where you can view the exhibition Race and Forest which had to be prematurely closed due to the pandemic. The exhibition prepared by an interdisciplinary research team INTERPRET tracks links between genocide, ecocide and forestry.

What should we do to ensure our debate responds to the challenges of the future? Biennale Warszawa looked for ways to apply knowledge in emancipation processes and expand the field of current discussion in various discursive series and publications. Economies of the Future, curated by Przemysław Wielgosz, were devoted to reclaiming economic imagination. Seminars conducted by leading economists representing the currents of heterodox economics were supposed to draw participants’ attention to issues ignored or marginalized so far, such as alternative digital economies, platform cooperativism, or class struggle in the 21st century. The series of lectures titled Plebs, Common Goods and Alternatives to Capitalism curated by Michał Pospiszyl, Katarzyna Czeczot and Łukasz Moll, focused on plebeian forms of life. Stories of women accused of witchcraft, fugitives living in the mountains, illegal immigrants, radicals and heretics from pirate ships became laboratories experimenting with non-capitalist forms of life.

The COVID-19 pandemic is not only an organizational challenge, which forced cultural institutions to operate and present art differently, but also a crisis which revealed the difficult economic situation of artists. This is why Biennale Warszawa launched a residency programme addressed to artists, researchers, curators and activists. Month-long online residencies for fifteen selected participants became a platform for the exchange of knowledge and experiences concerning artistic and socio-political contexts of their work and research. Artists’ activities conducted within their residencies aim at looking for alternative economic, social, political, ecologic, and educational models which could be introduced after the COVID-19 pandemic.

An immediate response to the first lockdown was also our web journal “COVID-19. The World After the Pandemic.” Authors of the texts published in this project wondered about political, economic or ecological alternatives which can be grasped easier in the times of crisis. The report A different culture is possible. Coronavirus and the future of culture in Poland prepared by INSTRAT Foundation for Strategic Initiatives for Biennale Warszawa described structural problems of the cultural sector, revealed as a result of the pandemic. Culture in the global context was the subject of the book The Missing Denominator. Universalism and Progressive Cultural Politics edited by Jan Sowa. It collects the voices of European intellectuals, researchers and activists concerning such issues as colonialism, neoliberal globalisation, identity politics, populism and migration. Year 2020 in Biennale Warszawa concludes with the publication of Cultures of anticipated futures, in cooperation with the Institute of Polish Culture of the University of Warsaw, in which the stake is recovering the future as the central category of critically-oriented humanities and social sciences.