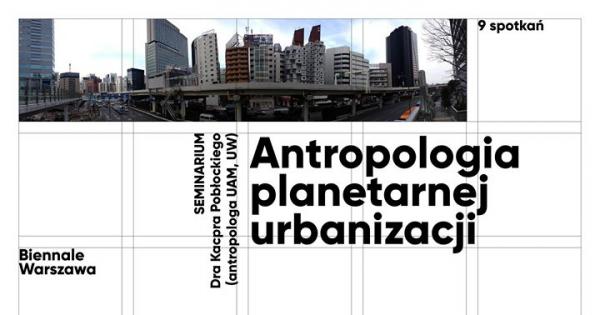 For a decade, more than half of humanity has lived in cities, and men, through the process of planetary urbanization, have transformed into urban beings, leaving countryside behind them. At the same time, the epicentre of world urbanization has inevitably moved from the West to the countries of the Global South. It’s not Paris or New York, but Lagos, Sao Paulo or Dubai that became “the cities of the future”. This epochal change means that the city and the urbanity as we know it are undergoing a fundamental redefinition. We are intellectually helpless in the face of this transformation, because the entire conceptual apparatus that we have at our disposal was created on the basis of Western historical experience. Therefore, the starting point for this seminar are the spatial processes currently taking place in the cities at (almost) each continent. On the basis of key reading matters, we will consider how radical is the current re-evaluation. Is there really, as some claims, a fundamental transformation of almost every sphere of human activity that has been happening beyond our sights?

This seminar will be a theoretical preparation for the June conference about Warsaw, organized by EUROREG and Biennale Warszawa within the framework of International Network for Urban Research and Action (INURA). INURA is an international network of researchers, activists, urban planners, journalists and officials who on a yearly basis explore a new city to understand its internal processes. The Warsaw conference will be the 28th edition of this undertaking – earlier meetings were held in Mexico, Toronto, Lisbon, Istanbul, Athens, Berlin and Havana. Unlike classical academic conferences, INURY meetings are based primarily on a series of city tours, organized and always led by local researchers. The aim of the Warsaw edition will be to perform a multi-level diagnosis of the city. It is necessary because the theories available to us are not able to explain the spatial cohesion of Warsaw; the spatial logic behind the various, often contradictory, processes that take place in it.

What is “spatial cohesion of the city”? Why the creation of a new, well-established theory for explaining the dynamics of the 21st century should be initialized by the urban processes? Why are the existing theories more interfering than supportive in terms of understanding contemporary social and economic processes? What is the “global materialism” method?

In 1950 there were only 2 mega cities in the world – New York City and Tokyo. Nevertheless, New York City became a paradigmatic training ground for creating concepts in urban studies. What would have happened if, however, we had decided to take Tokyo (the largest city in the world to this day) as a basic starting point? Hidenobu Jinnai, the author of the most important publication about Tokyo, shows how to do it literally. His book is a description of the unique logic of spatial expansion of the city and programming policy, discovered on the basis of urban migrations, which, although nowhere and never has been codified, is extremely cohesive and constitutes an alternative to the Western development model

Mike Davis’ “City of Quartz” is one of the most important items in urban studies and a paradigmatic example of how – at the interface of analysis of politics, economy and culture rooted in space – look for the key to explain the logic of individual cities. Why are the cities – in this case, Los Angeles from the turn of the 80s and 90s of the last century – laboratories of the future? What is the contingency of spatial processes? How to create a holistic (anthropological) theory of the city?

The book accompanying the winning exhibition at the Architecture Biennial in Venice in 2004 is still an unsurpassed example of how to study what is invisible, fleeting or even absent in the city. Filip de Boeck sets the cognitive boundaries of “global materialism”, at the same time showing why humans are the basic infrastructure in the cities of the global South.

Asef Bayat writing about Tehran “urban non-movements” and James Holston analysing the genesis of the Brazilian “insurgent citizenship” allow us to see that in order to understand the contemporary political process, the European dichotomy between the public and private spaces should be rejected. In what way are the very marginal inhabitants of slums (in Brazil) or also the small and mostly unnoticed street traders in Tehran have become the central public entities? What are the street politics and the material foundations of the “right to the city”?

The reportage of sociologist Matthew Desmond on evictions in the USA is one of the best examples of how to combine the structural analysis of the logic of urban capitalism with the story of individual heroic fates. How to create scientific monographs that you can read like a thrilling novel? How to reveal the mechanism of global capitalism by means of the description of one man’s history?

Frequently, the starting point in the analyses of urbanization is the place of residence, but the place of work – in where we spend an important part of the day – remains unnoticed. Paul Mason in his global history of the working class shows the diversity of workers’ urban (and political) cultures – also building a thread of analogy between the struggles of contemporary workers from the cities of the Global South with the achievements and the struggles of the Euroamerica workers from the turn of the 19th and 20th centuries. Only when we include labour in our analysis of planetary urbanization, we will be able to see that the last 20 years has not only been the unprecedented urbanization of our planet, but also the largest industrial revolution in the history of mankind.

In the case of Warsaw, the renaissance of discussions and urban researches, which have been being observed for the last 10 years in Poland, mainly concerned its architecture. The book “Warszawa. Podręcznik zamieszkiwania” (Warsaw. Residents’ guide) instead of ennobling and rehabilitating Warsaw’s spaces through its modernist heritage, it describes its often ignored and indecent everyday occurrence. The academic reportage “Foucault w Warszawie” (Foucault in Warsaw) in turn, is a masterful example of the extraction of unknown “small” urban traditions and cultures (and repressed spaces) and placing them in the centre, both attention and analysis. Does the key to understanding “the spatial cohesion” of Warsaw lie at its everyday occurrence?

The objective of the seminar is to composing a research team that will take part in the INURY conference in the role of participating observers – persons whose task will be, inter alia, consolidation of the meeting between several dozens of foreign researchers and those from Warsaw. The aforementioned meeting, as well as shared reflection on the everyday life of Warsaw, will be an empirical starting point for work on a book on how modern Warsaw “works”. The formula of the book will be developed by participants of the seminar. For now, we have only got a working title: Warsaw Vernacular Atlas.