The programme of Biennale Warszawa at the Department of Presence on Pańska street, Warsaw. 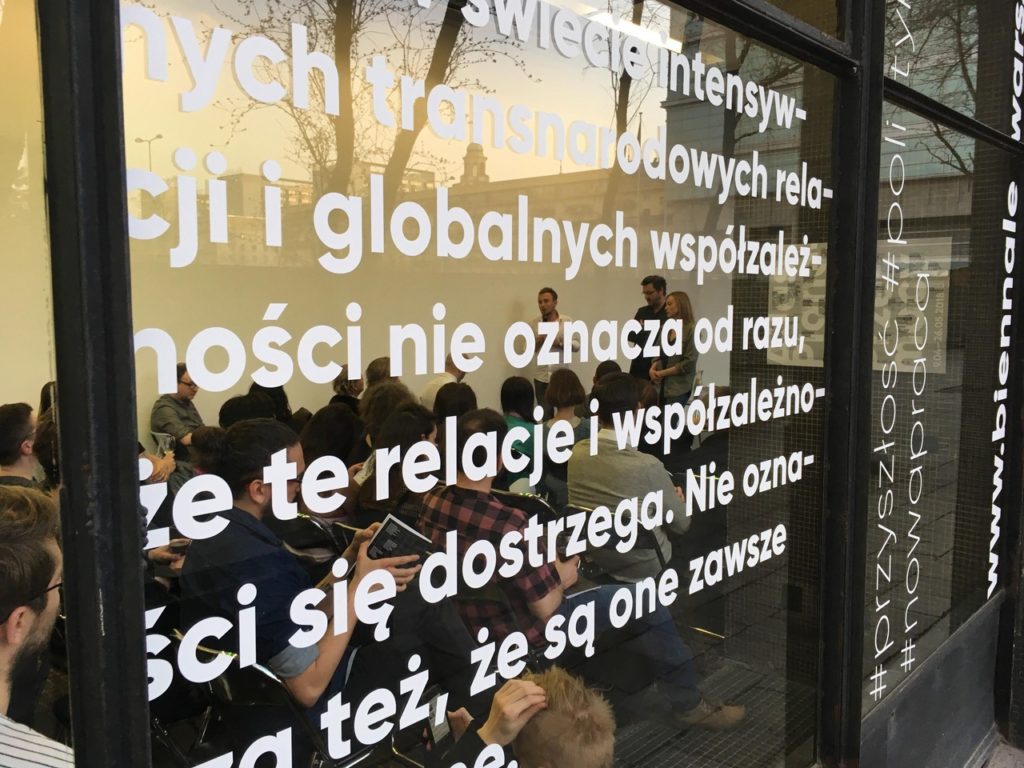 It is challenging to measure the scale or intensity of violence in an objective way. However, it seems that currently, in the time of extensive, global fluxes of people, commodities, capital, ideology and media, violence neither has lost significance nor become less cruel, barbarian or acute. What indeed happened was a reorientation of violence. Globalization created both its new forms and new tools for its distribution. What for some brought new possibilities of income and investment, for others became the reason for suffering, flight or exile, expropriation, land grabbing or modern forms of slavery. What liberates from the ties of various barriers and borders, which can give pleasure through direct access to places, people, images and objects located far beyond our local environment, is at the same time a cause of inequality. Deregulated, liquidated capital ‘zips’ through the international markets, swiftly introducing chaos into the everyday of many societies, leading to unexpected and unpredictable changes in the prices of commodities and raw materials, causing fear and instability among those for whom these commodities or raw materials are not the subject of speculation, but the absolute foundation of a dignified life.

While borders are completely permeable to liquid capital and usually do not resist the transport of goods; for many humans they become barriers that are very difficult to overcome. Their aim, however, is not to fully block flows, but to regulate, slow down and direct them in accordance with the logic and interests of capital. The porous boundaries of planetary jigsaw puzzles are being more and more complemented by a new infrastructure of violence. New walls are being built all over the world, to mention only the most spectacular one on the American-Mexican border, which materially complement the digital control system.

Violence becomes also an answer to the fear of existence in a world of unpredictable changes, unexpected events and uncertain tomorrow. The right wing knows how to play with this fear, strengthen it, awaken it and redirect it to the most vulnerable and liable social groups, such as the refugees. The real anger rooted in socio-economic inequalities, expropriations, gentrification, precarious work, social and economic degradation of the working and middle classes, is targeted towards those who have been forced to leave their homes and travel in order to preserve basic living conditions for themselves and their families. For this reason it becomes increasingly imperative to understand the archeology of the right-wing’s return and the right-wing populism. It is not enough to repeat the theses of history repeating itself and to recall the patterns of action of the fascist and nationalist right at the beginning of the 20th century; today’s right wing only remixes old discourses and strategies, in fact creating a complex, visionary project that responds to the current threat of global capitalism as defined by financialisation, ultra-fast, liquid capital, various forms of neo-colonial exploitation. It is a completely different situation and response, than the one which was given by the right wing after the October Revolution. This topic is taken up and analyzed by Paweł Wodziński in the performance Global Civil War.

Violence also affects the largest number of migrants in history (250 million) and more than 40 million modern slaves, most of whom are people who receive no remuneration for forced labour. Both phenomena are closely related – it is the migrants and refugees who are the most liable to servile exploitation. Both phenomena are a part of the process of primitive accumulation of capital, which takes place whenever a period of crisis of capitalism and a slowdown of economic growth occur. Robbery, expropriation, neo-colonialism, slavery and migration transpire when the return on investment is insufficient and the growth curve dives or becomes flat. However, this is not an abstract, delocalized process. According to the Global Slavery Index report, there were over 181 thousand modern slaves living in Poland alone in 2016. Why is this phenomenon invisible, absent from public debate? Why such unthinkable data remains so little known? Where are the slaves in Poland and what situations are we dealing with? In the performance “Modern Slavery” Bartek Frąckowiak and Natalia Sielewicz undertake a kind of documentary investigation to talk about the local expressions of this global phenomenon.

The catalogue of new forms of structural violence linked to globalisation, both the real physical violence and the equally real symbolic violence, is huge; we have decided to focus on a few cases and analyse them. Among others there are: right wing’s return, modern slavery and new forms of flexible work. We have arranged these phenomena in the form of an atlas. It is neither complete nor finished. Rather, it is a starting point; a starting point for a multi-threaded, multi-step analysis of the phenomenon of global violence. The formula of atlas allows to particularize a few specific cases from the dense chaos of the modern world and then put them into new configurations. It enables to delay the flow, stop and perpetuate the situation, even at the risk of simplification and all sins of classification. Capturing the moment of the state of the world, gives a chance to build other relations and to reflect, to perform the anatomical vivisection of the studied phenomena. It also allows to broaden and extend time and space, and consequently, to make present – if only through representation – this, what was absent and distant in relations based on mediation and distance.

The life in a world of intense transnational relations and global interdependencies does not immediately mean that these relations and interdependencies are perceived. Nor does it mean that they are always visible. Many of them were deliberately blurred, obliterated or obscured. The aim of our critical and political activity is to discover them and then place them in the atlas in new configurations, ones that would allow to understand them better. Confinement of violence in the atlas serves not only its exploration, but also a literal act of confinement, necessary in order to create a space of new possibilities; alternative projects, radical utopias, hope and change.