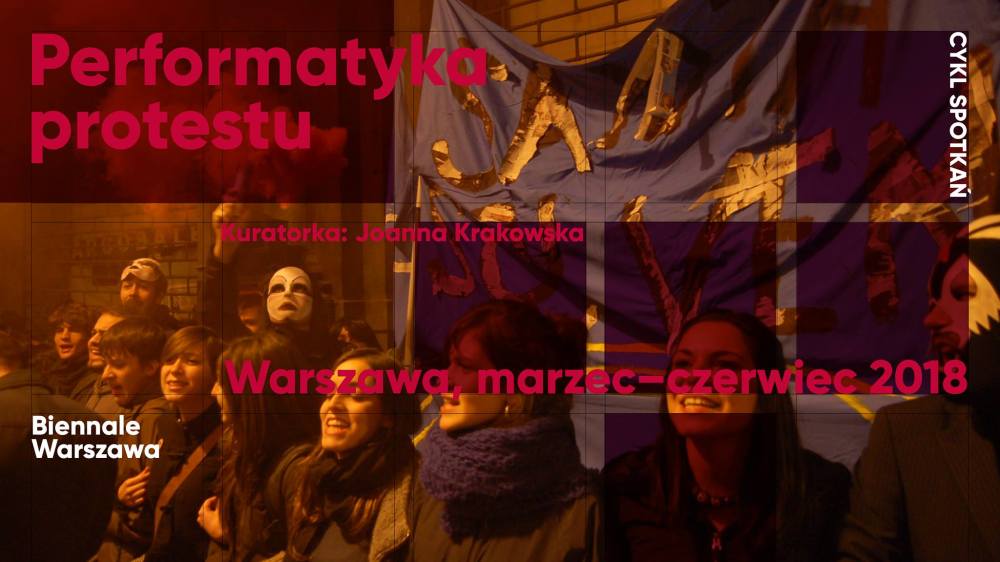 The performance of protest, also resistance, discord, contestation, affirmation and solidarity is a historical-political cycle, which analyzes not only the past but also the future; speaks about the specific knowledge concerning the strategy, the organization and the consequences of public manifestations. The series of meetings will debate both former and contemporary experiences of resisting, objecting and manifesting solidarity. Collectively, we aim to acquire practical and legal knowledge from the invited guests – experts, organizers of protests, parades, marches and gatherings.

The city has always been a space for various protests. Squares, streets, walls, shop windows, public buildings, cafes, churches, parks, theatres, pavements, galleries, housing estates, stores and river boulevards; alongside with the clothes and objects belonging to the people in the crowd – they all are media places, which in any possible moment can become a political tribune – used to manifest one’s emotions, express aspirations and formulate demands. Every movement, emancipating, contesting or revolutionary began with seizing urban space – storming of a prison , conquest of a palace, occupation of a park, takeover of streets and squares, invasion into a church. The seizure led to an irreversible transformation of these places. This transformation gave them new symbolic and political power.

During the subsequent cycle meetings we will look at the historical and contemporary strategies of transferring and transforming public space, the most effective forms of manifesting opposition and articulation of demands, successful methods of persuasion, attracting attention and circulating one’s own postulates and slogans.

The performance of protest, resistance and solidarity is a project both historical and political, executed with a belief, that the experience of victorious social upheavals and changes, the success of emancipation and equality movements has always depended, and to a great extent will continue to depend, on their performative power and effectiveness.

We will begin with the carnival experience of the 1980-1981 Solidarity movement and the following years marked by social protests and acts of individual resistance, which manifested a great variety of means and forms; only to proceed with the analysis of the most important protest strategies in terms of their objectives and effectiveness.

From collective choreography and methods of its organization, through methods of using means as effective as fire and as radical as hunger strike, to passive and active provocations, civil resistance and various artistic activities.

The proposal that the most significant revolutions, revolts and social protests of the recent decades should be perceived not so much through an ideological but, above all, a strategic prism, will inevitably force us to reflect on both the real violence and the dangerous dimension of symbolic violence.

The guests of these meetings are people with practical experience and theoretical background, possessing legal, medical, organizational and technical knowledge, with whom we will talk about pragmatic aspects of performative protest actions, among others.

In the period 1980-1981 and in the following years marked by the constant social confrontation, protests against the authorities adopted innumerable forms, in which, however, the basic elements still remained the word – catchphrase, slogan, literary work, tag, typographic form, new narrative, spoken history. Paper ammo and a discursive offensive constituted the main strategy of resistance and protest from the moment of formulating 21 postulates were made, to broadcasts of the underground radio and the entire culture of the second circulation. The extremely logocentric revolution of Solidarity manifested, perhaps for the last time in history, a true faith in the word and its performative power. Mentioning that carnival, however, it is worth asking about the modern ways of solidarity and resisting state violence.

Erwin Piscator, Nikolai Yevreinov and Leon Schiller knew something about the arrangements of the crowd, directing masses and collective choreography. The twentieth century brought the raise of these forms to the social ground, at the same time referring to iconic (painting and literary) representations of collective protests from centuries past. How do the dynamics of crowds shape in marches, at rallies, during the occupation of public places? What is the importance of the additional attributes here – candles, keys, televisions, carnations and umbrellas? How to effectively and effectively direct the city?

A gathering and, at the same time, a political act may be both a strike in the factory, as well as an eviction blockade; annual march, and seemingly spontaneous walk. The question is what is allowed in such circumstances and what shall not be done, what are our rights and how to defend them when they are at risk?

The fire appears as an attribute of protest in extreme situations when anger, rage, powerlessness or despair must find an outlet and other ways of communicating them have failed. Fire is used to manifest hatred when the effigies are burnt and to express solidarity when candles are lit. Manifesting with fire can precede real violence. It may direct attention to your own determination and readiness for personal risk. It may finally take the form of burnt offerings – as in the case of the self-immolation of a Buddhist monk, Ryszard Siwiec, Walenty Badylak, Jan Palach, and Piotr Szczęsny.

Besides self-immolation, starvation is the most radical form of protest, which is usually followed by fighters of lost, hopeless or simply very difficult cases in a situation where the only real hope is to raise public opinion, create social solidarity and discredit power. Hunger protest is considered to be the main non-violence strategy, and this was also its origin, although in reality it is an act of self-harm, and sometimes even leads to martyr’s death Hunger protests, due to their durability, have a peculiar narrative potential, which is worth examining on specific examples. It is also worth finding out how the human body reacts to long-lasting starvation, what its health effects are, how to end it up and how to care for starving ones.

Provocation, which aims to draw attention and trigger a reaction, often extreme and brutal, repeatedly in the form of criminal repression using the whole apparatus of power and legal system, is the most effective form of breaking through to public opinion due to its long-term legal and media consequences. It may be a way to visualize a specific problem, and at the same time the cause of protest and a means to provoke public debate. Provocation is by definition a controversy, and therefore it can also directly turn against protesters and their environment. Due to its specific power to reveal real violence through the use of symbolic violence, provocation has outstanding performative values.

Performance and its various theatrical or visual variations, from the beginning, has been associated with contestant artistic, political, revolutionary and provocative movements. Itself, it was a change and a change it has been generating, but above all, it has been bringing into social protest an element that had not been thought up so far, an element of creation, surprise, overturning or reversal of order. Contemporary Black Rags or Consortium of Post-artistic Practices are the heirs of happenings, street performances, guerrilla theatre, Orange Alternative, Movement Academy and many other performative practices that existed before they were so named.