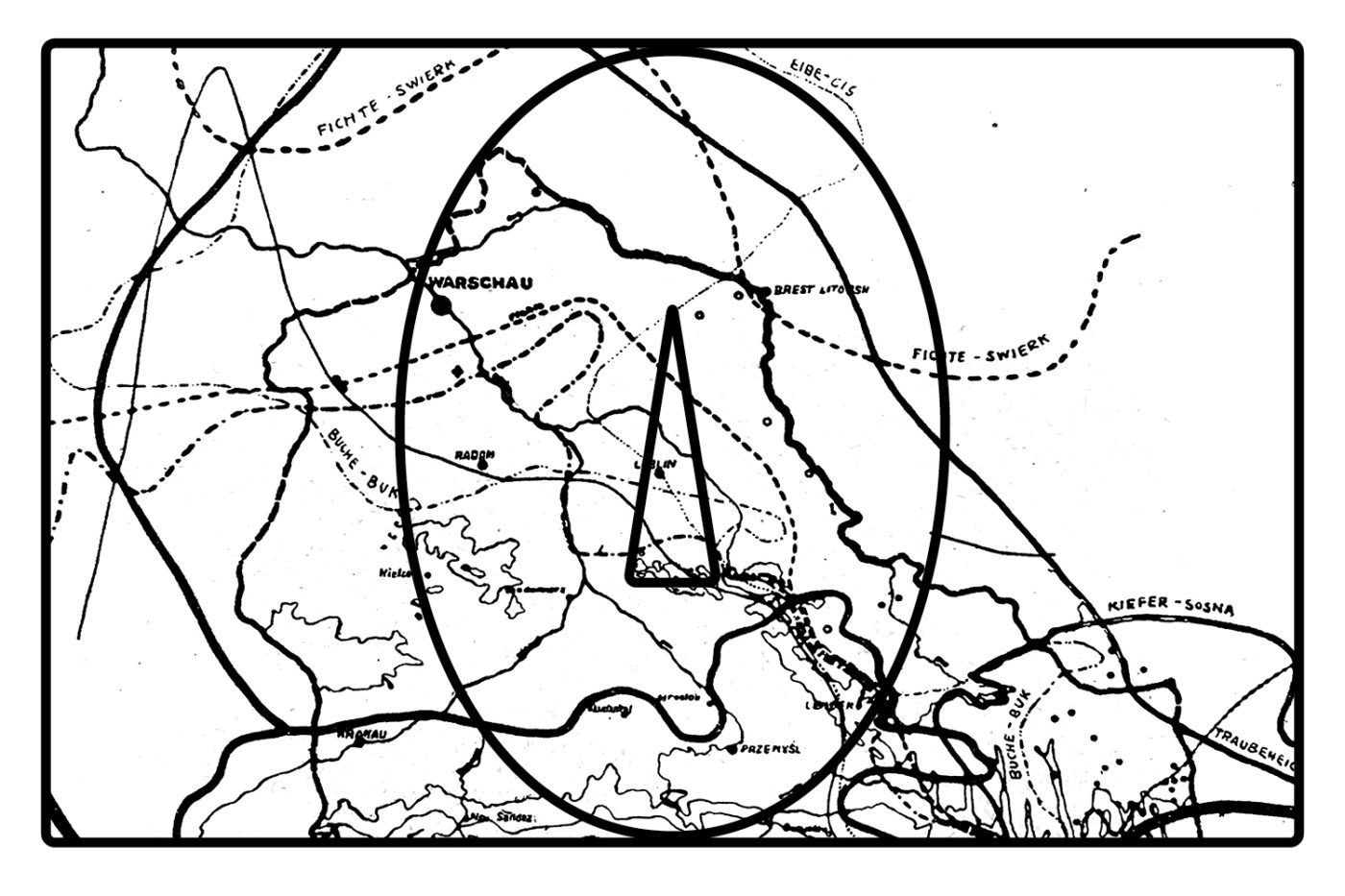 The exhibition “Race and Forest” – prepared by the investigative INTERPRT team that gathers facts about crimes against the environment – will be open from 6 March in Biennale Warszawa at Marszałkowska Street. The exhibition tracks links between genocide, ecocide and forestry, reaching back to the period of the Second World War.

Discussions concerning the climate disaster more and more frequently mention the necessity to acknowledge ecocide as a crime in the light of international law. One of the first ever examples of charges where the environment became the main subject of court proceedings was a case presented by Polish prosecutors, concerning the destruction of Polish forests by Nazi Germany. Race and Forest, the exhibition shown at Biennale Warszawa reconstructs the circumstances of this precedential indictment.

The exhibition was prepared by an interdisciplinary research team INTERPRT which collects facts related to the crimes against the natural environment.  It devotes particular attention to points where international humanitarian law intersects the legal protection of the environment. Re-entwining images, documents, testimonies and data from various sources, it creates a framework for new reflection. The project displayed at Biennale Warszawa examines the material and visual nature of the evidence in the case no. 1307.

Its history dates back to 1947, when as part of the United Nations War Crimes Commission (UNWCC), Poland brought against eleven German citizens charges of war crimes related to the destruction of the natural environment. Polish prosecutors prepared a bill of indictment not only for high ranking German state officials, but also the employees of German forestry departments. The trial concerned deliberate devastation of Polish forests in order to supply timber for German war efforts. At the same time Germany was developing modern forestry and taking considerable measures to conserve their own forests.

Part of the exhibition is devoted to the history of a Nazi death camp located near Chełmno nad Nerem (Kulmhof). In the first period of the operation of the camp – hidden in the Rzuchowski Forest – a secret reforestation plan was implemented in order to hide the evidence of mass graves.  The investigative project carried out by INTERPRT in cooperation with Biennale Warszawa combines archival and cartographic research with wartime testimonies and LIDAR scanning to conduct a new spatial analysis of this area.

The exhibition will also feature materials concerning how were the race issue and environmental issues connected in the Third Reich ideology. Among them, “Wald und Holz” (forest and timber), a periodical which during the Second World War was the official gazette of the forestry industry in the German-occupied areas. The data collected in it were supposed to help in effective exploitation of Polish forests. The paper propagated the ideology of environmental racism, according to which Germanic and Nordic people were to protect nature against the designs of savage Slavic peoples.

The new exhibition at Biennale Warszawa constitutes an expanded version of Race and Forest which was open for visitors for two weeks during Let’s organise our future!, during Biennale Warszawa in June 2019. It was supplemented by new materials, including first and foremost film footage prepared by INTERPRT at Home Works 8 in Beirut. Due to the unrest in Lebanon the event was cancelled, and new elements of the exhibition, the same as the lecture given by Nabil Ahmed (co-founder of INTERPRT), were not presented to the public. Now they will enrich the exhibition at Biennale Warszawa which will be open until 19 April 2020.

By analysing the history of genocide in the context of nature, Race and forest includes the study of the Holocaust into the current deliberations about climate change and human responsibility for the environment.  Can the case no. 1307 become a basis for considering nature as a legal entity? How to extend legal protection also to non-human beings, animals, or ecosystems?

Taking up the topic of crimes related to the environment requires a comprehensive view – not only new formulas of thinking, but also acting. When designing the communication for Race and forest we wanted to reduce the environmental impact of our actions to a minimum. We have made only a single copy of a leaflet for our visitors to pass around, and a single poster exhibited for a limited time in various places.  While reducing the industrial manufacturing of materials, we want the Internet to be the main source of information about the exhibition, and knowledge about it to travel by word of mouth and to be handed around.

Fighting impunity in a warming world

Event as part of the side programme accompanying the exhibition "Race and Forest”
29.02.2020

Event as part of the side programme during the opening weekend

The tour of the exhibition “Race and Forest” is conducted by Nabil Ahmed from research team INTERPRT. Free admission during...
11.02.2020