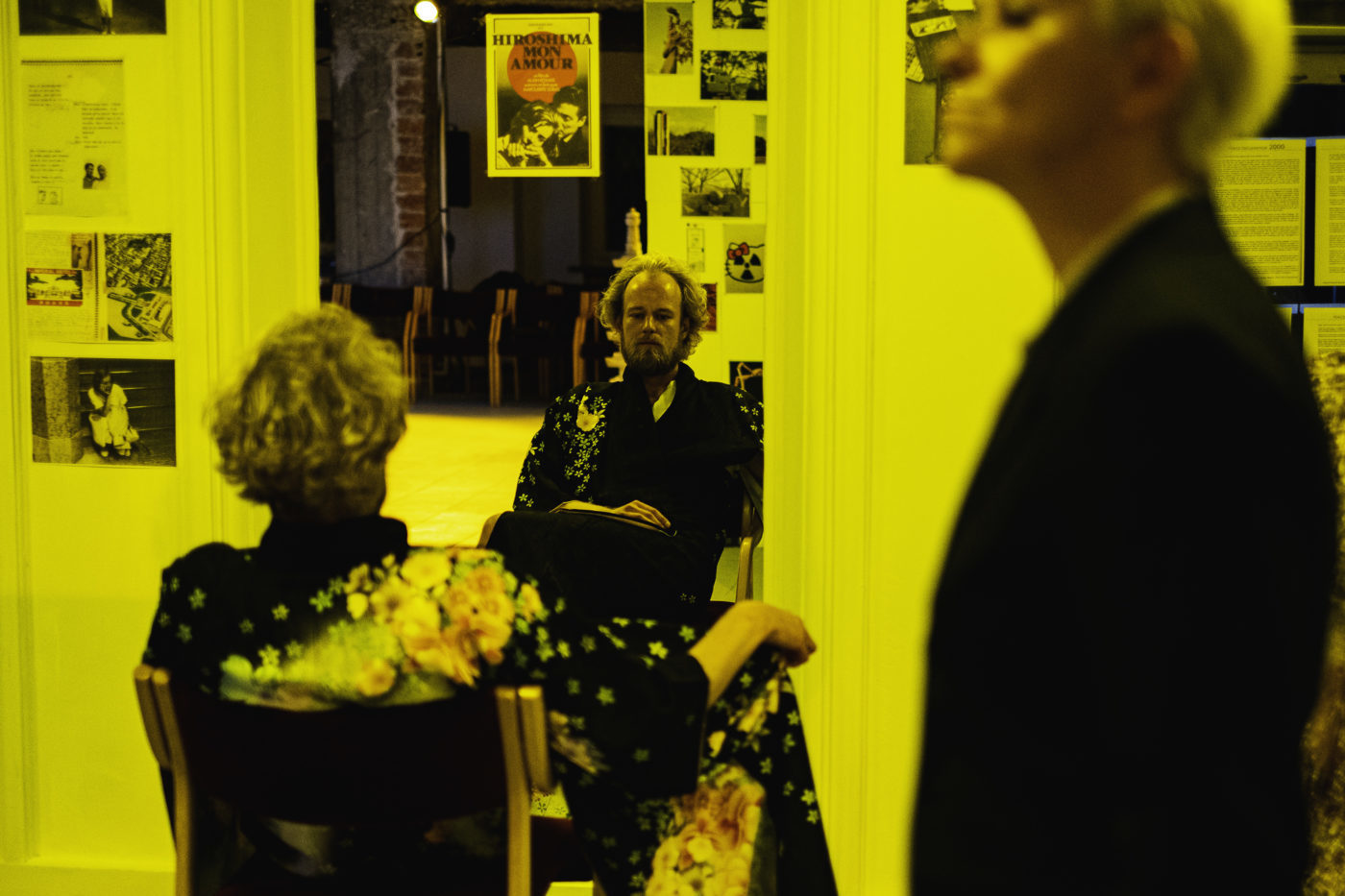 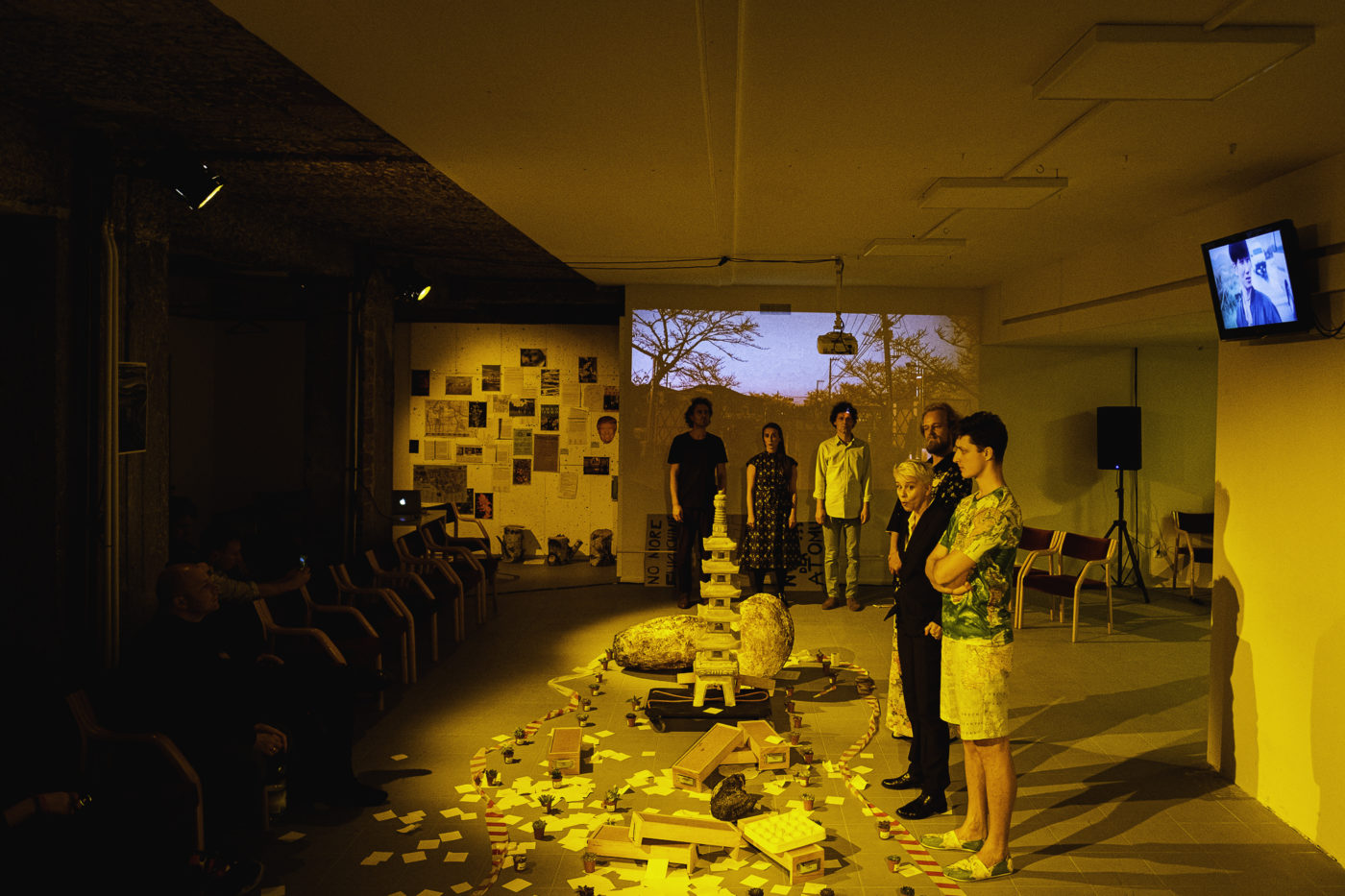 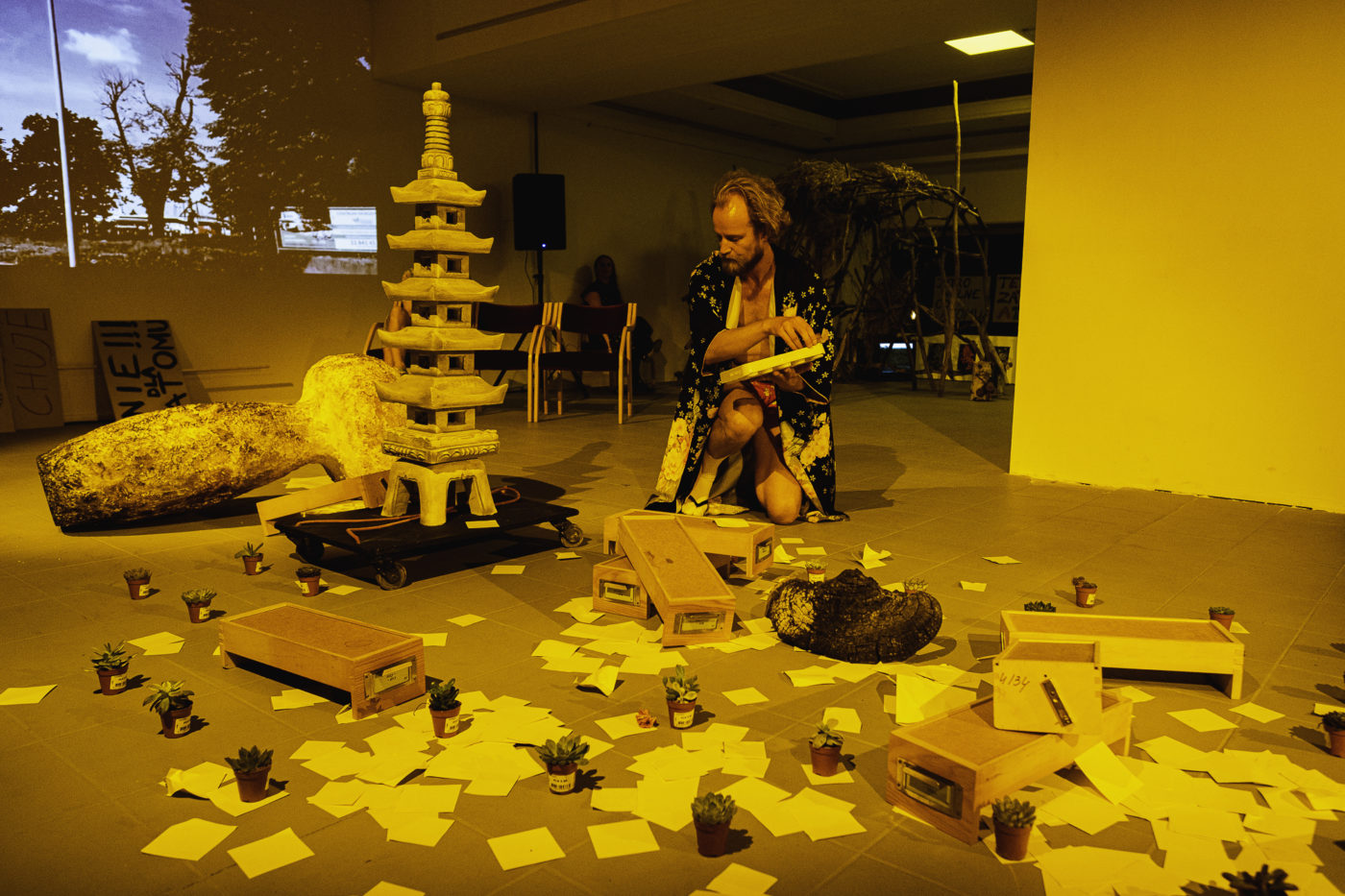 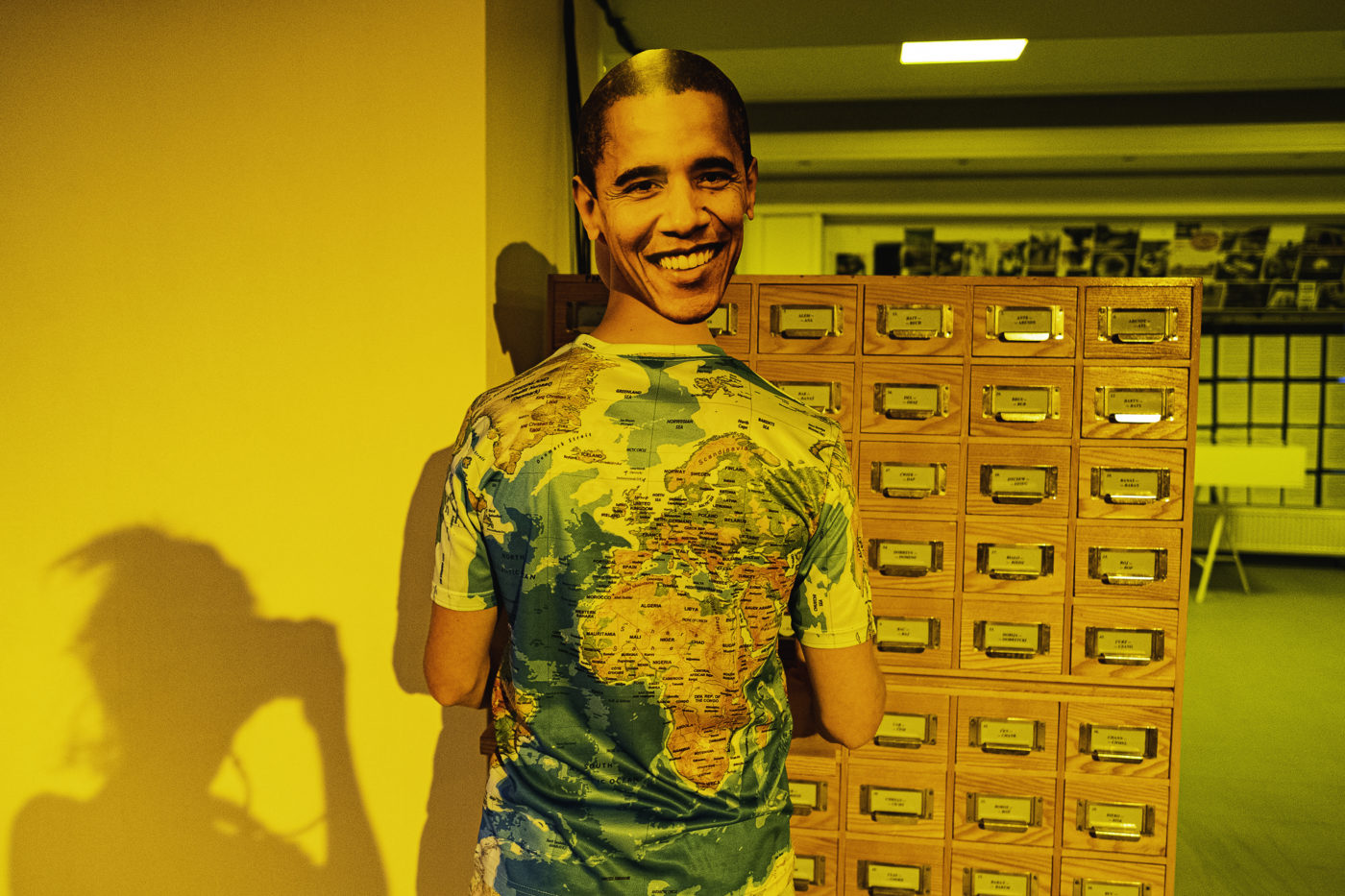 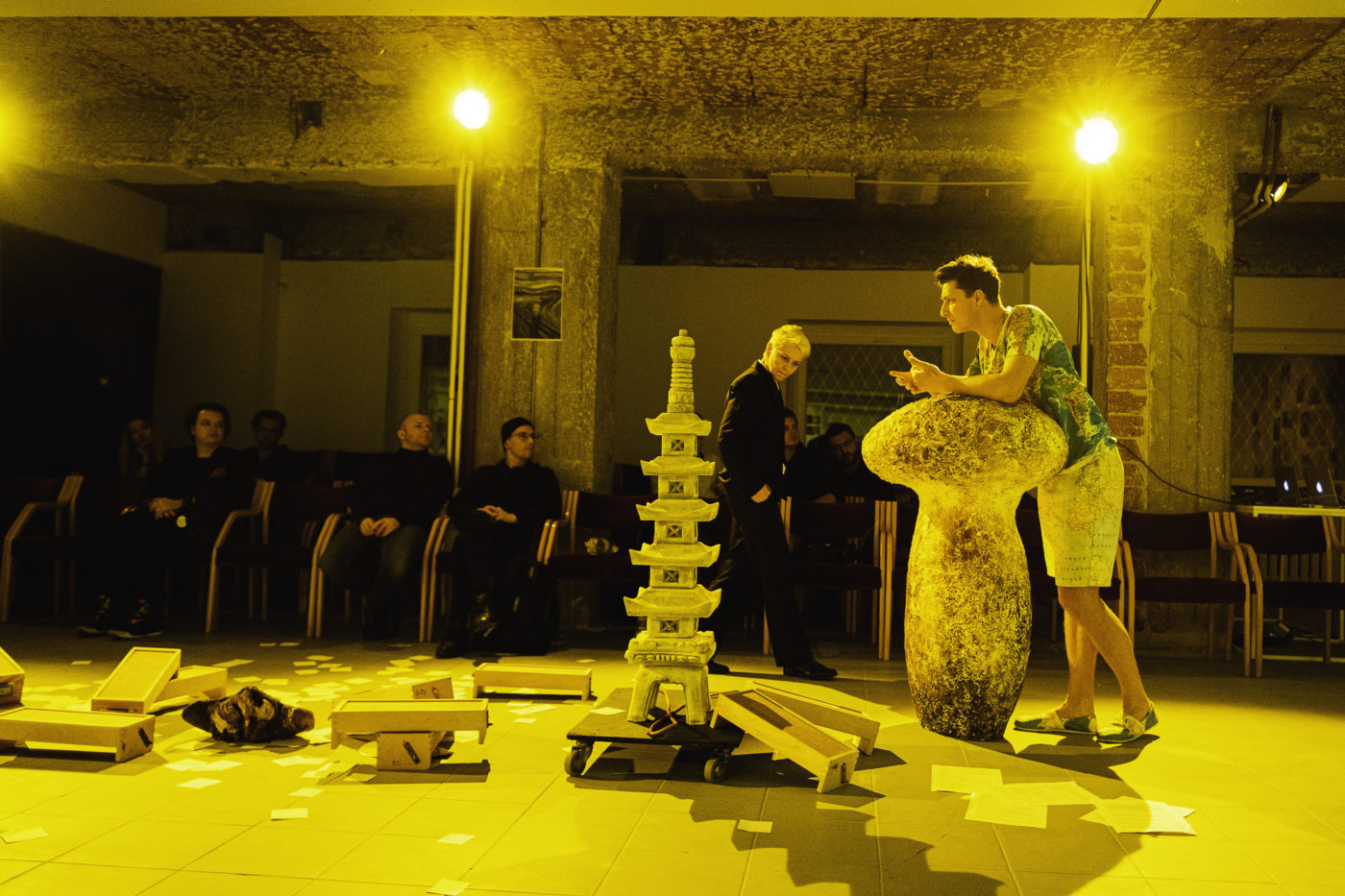 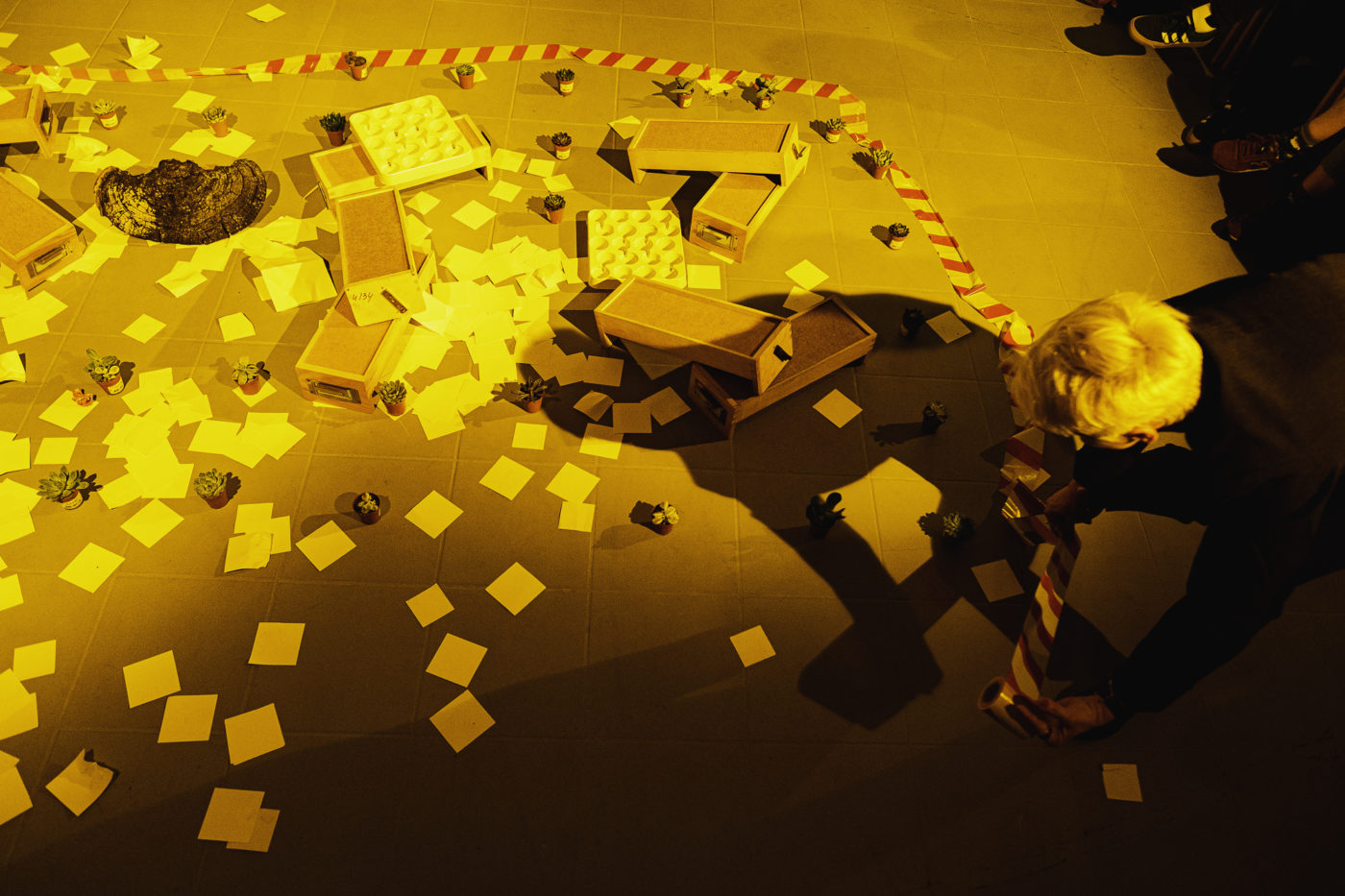 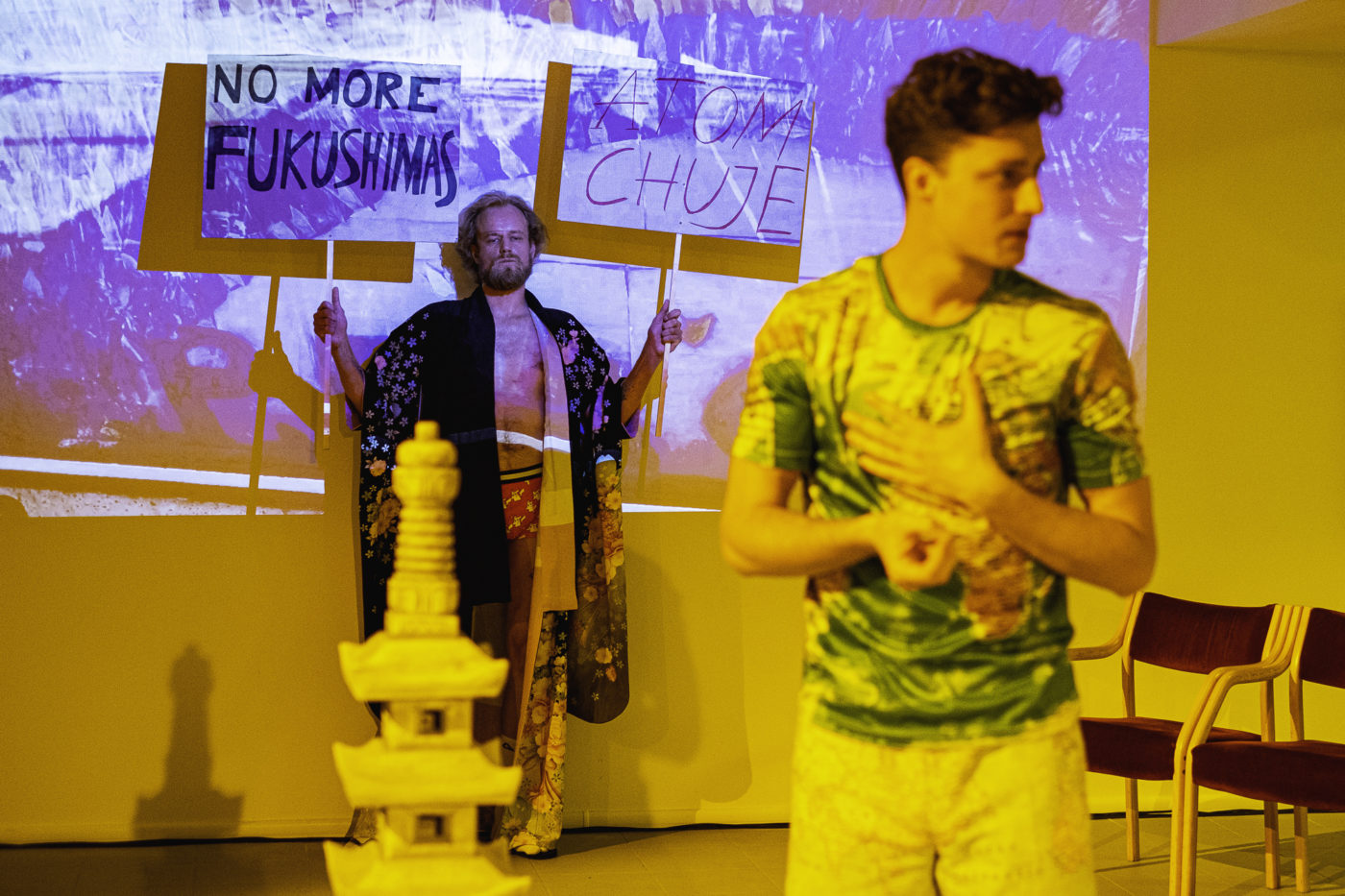 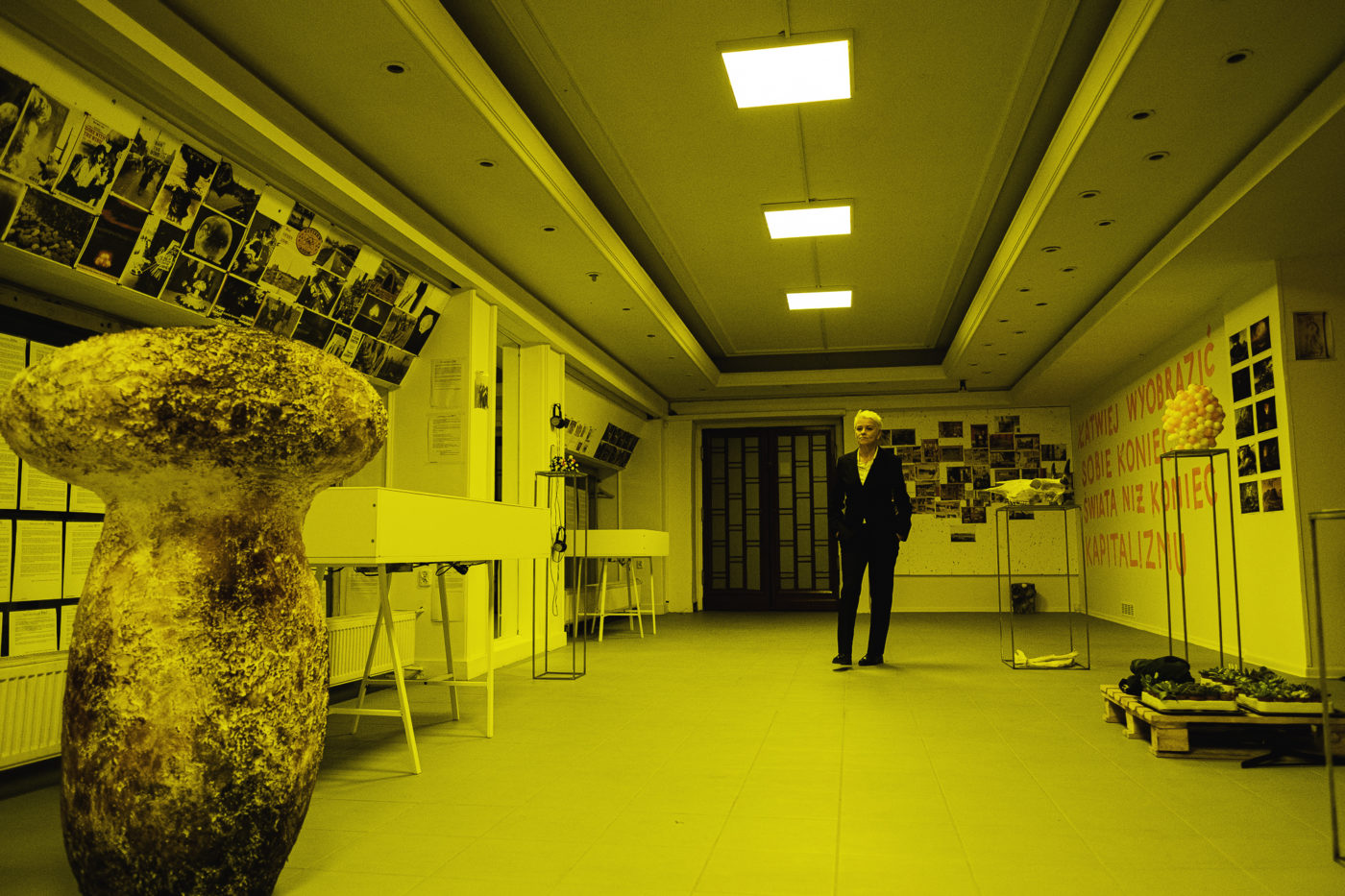 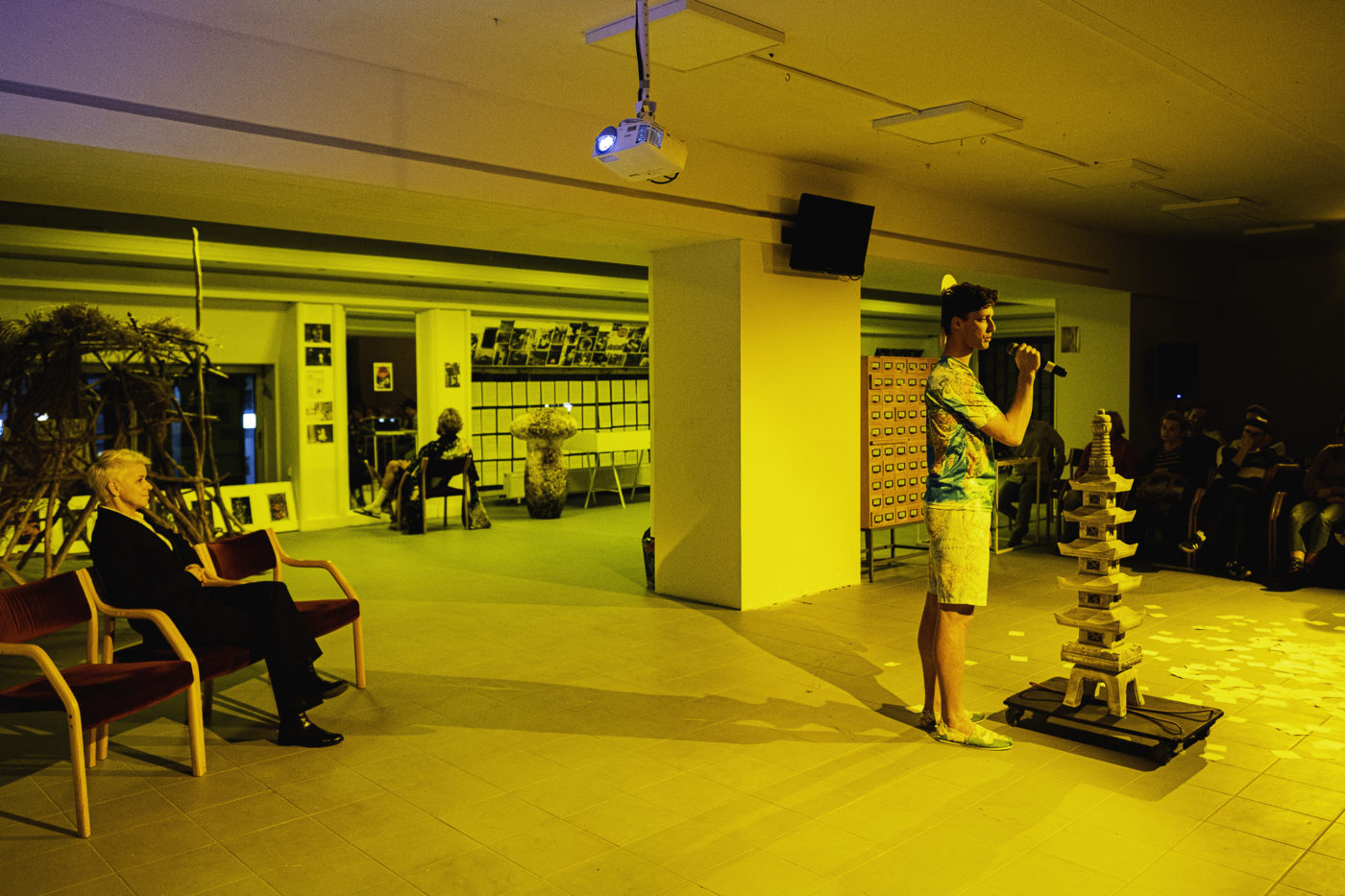 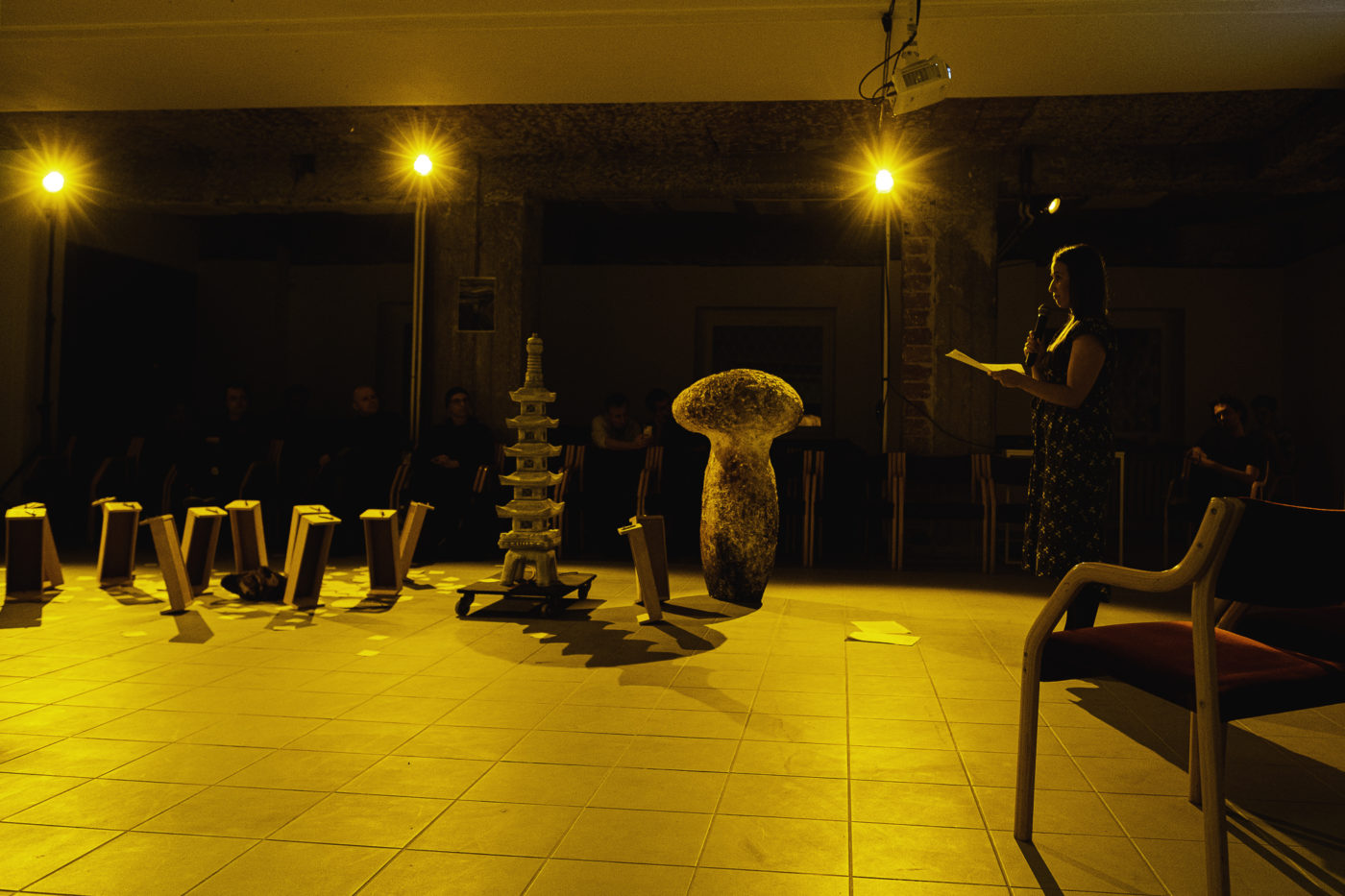 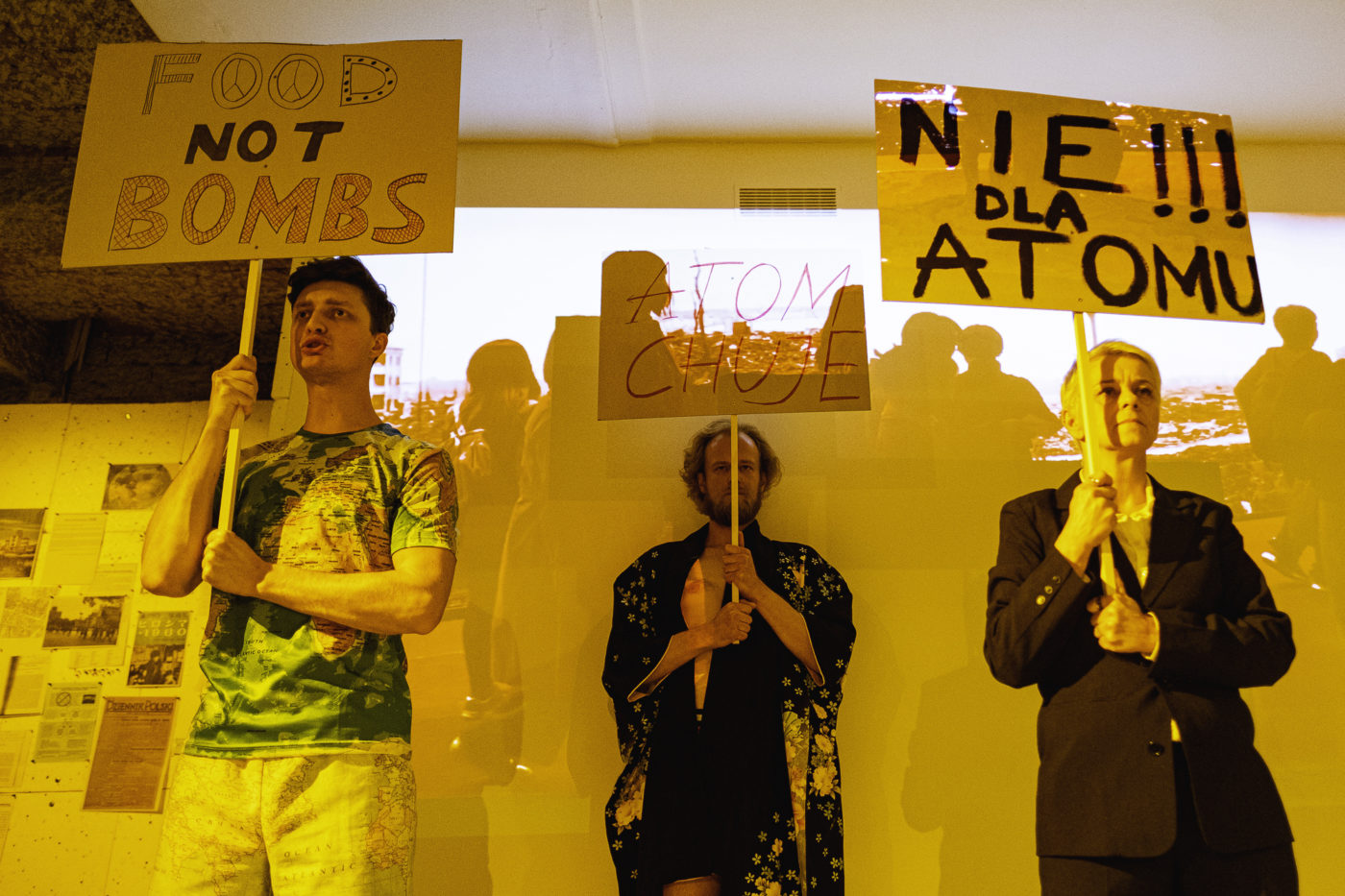 The spectacle Hiroshima / Love touches on the themes of necro-journey, ecology, catastrophe, destruction, love and memory (or lack thereof). Central to the story is the exploration of the political, environmental, social, historical and economical contexts of atomic energy, as well as those of momentous disasters which have been consequential for human culture and ecosystem, such as Hiroshima, Auschwitz, Fukushima and ancient Pompeii.

The starting point of the plot is the explosion of an A-bomb in Hiroshima on August 6, 1945 with residual visions of total destruction in the world today, and it alludes to Alain Resnais’ Hiroshima, My Love movie (1959), probably the most interesting artistic elaboration on that theme. 60 years after the film was created and 74 after the bomb was dropped, as we may once again be facing an imminent outbreak of an armed conflict, fear is a global experience and environmental catastrophe is becoming a key issue, the artists are asking about the possible meaning of this conjunction.

By examining multiple aspects of the theme, the performers stage a fragmentary and momentary records of the destruction. At the same time, they are casting a reflective eye on what is their own experience and simultaneously, a frequent contemporary quasi-tourist practice: traveling to disaster sites – tracing destruction. What is the meaning of these necro-journeys? What is so attractive about them? Can the wish to sense the vicinity of death be equally stimulating as an outburst of love?

The relativism surrounding nuclear energy invites reflection on the issues of security, activism, the utopia of pacifism and the search for alternative spaces and philosophies. Hiroshima / Love is also a spectacle whose creators want us to have a closer look at the paradoxical coincidence of environmentalism, capitalism and nationalism.

Design of the matsutake mushroom

A disaster does not announce itself, the disaster happens – today, on the brink of a climate apocalypse, these words resound especially loud. Can knowledge about the past teach us anything in this respect? Does, and at which point, predicting the future combine with the consideration of past disasters, with reading from the ashes whose meaning increasingly often eludes us?

In 1958, several years after the tragedy of Hiroshima, Günther Anders, German philosopher and anti-nuclear activist, proposed a change of perspective: he claimed that from 6 August 1945 we have been living in a world after “the end”, in a new era which is, in fact, a protracted global war, a postponed apocalypse best visible from “the Hiroshima bridge”. It seems that Anders’ musings can be understood today in a more profound way than just as anxiety concerning the cold war arms race and uncontrolled expansion of technology, so typical of his time. Current discussion about the Anthropocene and irreversible, human-made climate and landscape changes casts a new light on post-war fears, debates and protests under the banner of “No more Hiroshimas.”

The reaction to the warning sent out to the world on 6 and 9 August 1945 (and sent out with each subsequent nuclear test, and including Chernobyl and Fukushima) is not only an apocalyptic fear, but rather―what is particularly significant―the capitalist reaction to that fear which warps the nature of the threat, transforming the disaster into another form of perverse, indirect entertainment, an amusement park of attractions. After all, quoting already famous words of Frederic Jameson, “it is easier to imagine an end to the world than an end to capitalism.”

Necrotourism which consists of visiting disaster sites, places of total destruction, such as Hiroshima and Nagasaki, Chernobyl, but also Nazi death camps or sites of historical natural disasters (Pompeii) has therefore a double purpose. On the one hand, it enables to see, for a moment, in the signs of the past, our possible (and probably inevitable) future, and on the other hand, it shows as through a magnifying lens the mechanisms of transforming human (and non-human) destruction and its remembrance (as well as its territory) into an unending, capitalist spectacle in which everything―from the images of Hiroshima and Auschwitz, to space, all the way to the awareness of the climate catastrophe―is for sale.

When in 1958 Günther Anders visits Hiroshima and the 4th International Congress against the Atom and Hydrogen Bombs and for Nuclear Disarmament, in the Hiroshima Museum of Peace built only a couple of years previously, the first exhibition devoted to the peaceful use of nuclear energy is held―a decisive moment which would push Japan toward its application on a mass scale. This paradoxical situation―without forgetting the distinction between the peaceful and military use―perfectly reflects inconsistencies emerging in the discussion around the atom. Looking into this issue and the perception of nuclear disasters in general, are always accompanied by the multiplicity of irreconcilable discourses, narratives and truths. For instance, the Vienna Committee investigating the disaster in the Daiichi nuclear power plant in the Fukushima province (11.03.2011) maintains, just like government agencies, that the incident resulted in two fatalities and that people can slowly start returning to the exclusion zone. Meanwhile, for several years independent experts, activists and local residents have been monitoring the destructive impact of the radiation on human health (cancers) and ecosystem degradation; adding to that, we have the issue of social exclusion of the victims and their mental wellbeing. The truth of physicists or politicians does not have to be (and often is not) the truth of the so-called “ordinary people,” or activists acting on their behalf (and are they really?).

1958 is also when Alain Resnais arrives in Hiroshima to shoot his film Hiroshima, My Love (1959). Together with documentaries from previous years, Night and Fog (1956) and All the Memory of the World (1956), they form a coherent statement about the relationship between the official and private memory, the global archive and human history. In the first two films the camera visits Hiroshima and Auschwitz – places marked with unimaginable suffering and apocalyptic destruction. Resnais shows a slow trivialisation of memory and its rituals, its deformation and inability to find a language appropriate for it. In Hiroshima…, by making a woman’s private love story equal to incomparable and unprecedented tragedy of the entire city, he indicates not only the primacy of passions in perceiving and writing history, but also certain obscenity that always accompanies great disasters and destruction. Obscenity which nowadays―due to global capitalism―surely becomes something else than in the image captured by Resnais.

The famous line from the film: “You saw nothing in Hiroshima” is also a question precisely about the images of disaster, about their (in)visibility or their (over)presence. About the landscape which is not innocent, but is subject―whether in Auschwitz, Hiroshima or Fukushima―to incessant processes of reshaping, policies of nature that are even more visible there and even more paradoxical. Just like the atom and its effect remain invisible to the naked eye, many other processes―in politics, market, nature―are effected out of sight of the resident or the tourist.

The painting tradition of portraying oneself as a blind man, a self-portrait in ruins―a clear sign of the crisis of representation―today, in the times of post-atomic and climatic fears, gains a new dimension. Disasters―the one in Hiroshima and the one in Chernobyl, but as accounts of witnesses indicate, the one in Pompeii as well―were accompanied by distorted vision, inability to estimate the scale and nature of the event. Sometimes, like in Chernobyl, or Pompeii, the moment of destruction became a beautiful, illusory spectacle, an image not created by a human hand. “You saw nothing in Hiroshima” – this phrase seems so modern today, almost impossibly relevant. At the same time, it is a call to action slogan. But is it not belated?

It is yet another paradox that Onkalo, the most dangerous place on Earth, is intended for storing nuclear waste. Is it what remains after the end, is that the “all the memory of the world” which Alain Resnais was seeking in immense libraries? But will the archive survive the complete annihilation? And what to do with a radioactive archive? After long debates scientists working at Onkalo, researchers, philosophers, and artists established that the universal sign which―after the ultimate apocalypse―will warn the remnants of the human or alien (if they exist) race of the lethal contents of the bunker is an image based on Scream by Edward Munch. A gesture of terror and despair.